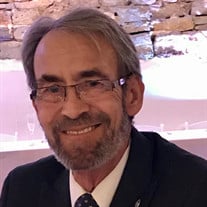 George Edward Underwood III, 71, longtime resident and business owner in Traverse City passed away suddenly at home on Tuesday July 28, 2020 in the arms of his beloved wife Jan. George was born in Detroit in 1949 to the late George Edward and Lyleth Jane (Turner) Underwood Jr. He was raised and graduated high school in Royal Oak, and went on to college at Ferris State University where he earned his bachelor’s degree in Chemistry and Business. In 1969, George married his beautiful wife and high-school sweetheart Janice Jean Little, and together they raised two wonderful children Erin and Chad. Prior to moving to Traverse City, George owned Diack, Inc., a medical controls company based in Beulah, MI. In the early 1980’s George sold that business and started Picture Quik, a popular photo lab on Garfield Road that George and Jan owned for 23 years until George retired in 2005. In retirement, George went on to work part-time at the photo lab at his local Sam’s Club. George loved being outdoors, and in his spare time he enjoyed photography, boating, gardening, fishing, and golf. Most importantly he was a man that loved his family above all else. His favorite times were those spent with his six grandchildren, now ages six to 21. George was a wonderful, kind, loving and gentle man. He was a committed husband, father, grandfather, brother, and uncle; and he will be deeply missed by all who knew him. Sadly, in March of 2019 George had to endure losing his daughter, Erin Banton, to Metastatic Breast Cancer. George was devastated by the loss, but kept Erin’s memory alive everyday through his love for his three grandsons, which he lived for after Erin’s passing. Surviving George is his wife Janice of 51 devoted years; son Chad (Kim) Underwood of OH; son-in-law Travis Banton; six grandchildren, Carter, Nolan, and Griffin Banton, and Avery, Marin, and Linley Underwood; siblings, Karen (Loren) Wolfe of Indiantown, FL, Beth Parkinson of Saline, MI; siblings-in-law, Paul Little of Traverse City, Doug (Jen Straus) Little of Traverse City, Don (Julie) Little of Sarasota, FL, Jackie (Mark) Benson of Clarkston, MI, Jill (Brian Riggs) Little of Traverse City, and many nieces, nephews and cousins. Due to the current COVID-19 situation, a private memorial service will be held for family-only at 11am on Wednesday August 5, 2020 in the Gardens of the Reynolds-Jonkhoff Funeral Home. Friends and others are encouraged to attend virtually by logging on to www.rjfh.tv at that time where a live stream of the service will be broadcast. The family is also asking everyone to share their condolences, memories, and stories about George in writing by sending cards or notes to The Underwood Family c/o Reynolds-Jonkhoff Funeral Home, 305 6th Street, Traverse City, MI 49684. Memorial contributions may be directed to the Cowell Family Cancer Center. The family is being cared for by the Reynolds-Jonkhoff Funeral Home www.reynolds-jonkhoff.com.

George Edward Underwood III, 71, longtime resident and business owner in Traverse City passed away suddenly at home on Tuesday July 28, 2020 in the arms of his beloved wife Jan. George was born in Detroit in 1949 to the late George Edward... View Obituary & Service Information

The family of George Underwood created this Life Tributes page to make it easy to share your memories.