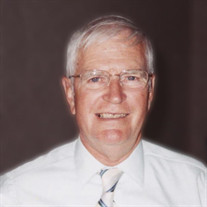 Gerald Duane Ankerson, 83, a life long resident of the Traverse City area, passed away Saturday, November 17, 2018 at Culver Meadows Senior Living Center in Traverse City. Jerry was born on August 12, 1935, the son of Thomas and Nellie (Smith) Ankerson. He was raised on the family farm in Long Lake Township and attended Traverse City schools, graduating from Central High School. He served our country as a member of the U. S. Army from 1955 until 1957. He met his future wife, the former Shirley C. Weber, while working at Cherry Growers. They married on August 20, 1960 at Immaculate Conception Catholic Church, where they had remained members of the Parish. Jerry began working at Cone Drive as a machinist, and retired after working there for over 30 years. He loved to travel to the cabin (Ruban's Roost) in the Upper Peninsula where he enjoyed hunting, fishing and playing cards. He also loved spending time at the family property on Long Lake, where the entire family would get together to spend time on the lake, swimming, boating and fishing. Surviving Jerry is his son Tom (Vicky) and his grandchildren, Bjorn Ankerson and Nicole Smith as well as many extended family members. He was preceded in death by his wife Shirley on October 14, 2016, by his parents as well as his brothers, Merle, Donald, Kenneth, Arnold, Leo, and Paul Ankerson and his sisters, Arlene Horton, Maxine Balentine, Jean Zenner and Bonnie Zenner. Visitation for Jerry will take place Friday, Nov. 23, 2018 from 6 until 8 p.m. at the Reynolds-Jonkhoff Funeral Home with the rosary being prayed at 7:30 p.m., Deacon Rene Hoensheid officiating. The Mass of Christian Burial will be celebrated 11 AM Saturday, Nov. 24, 2018 at Immaculate Conception Catholic Church with Father Anthony Citro, presiding. Visitation will take place at the church one hour prior to the mass. Burial will be in Linwood Cemetery, Long Lake Township. For a more lasting memorial, the family would suggest that Jerry be remembered by a contribution to Hospice of Michigan, 11850 E. Traverse Hwy., #1155, Traverse City, MI 49684.

The family of Gerald Duane Ankerson created this Life Tributes page to make it easy to share your memories.

Gerald Duane Ankerson, 83, a life long resident of the Traverse...