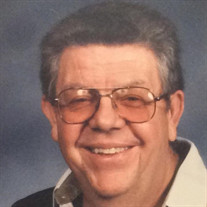 Gerald Herbert Cook Sr., “Jerry,” age 85, of Traverse City, completed his earthly journey and joined his Savior on November 25, 2021. Jerry was born on April 17, 1936 to the late Bert and Helen (Griswold) Cook in Howell, MI. A man of big-hearted love, no one loved family or friends more than Jerry. He was God loving, intelligent, kind, handsome, witty, generous, and a maker of tasty goulash. Jerry was an avid reader, a sports enthusiast and he proudly wore the colors of U of M. He would jokingly tell passersby if incorrect school-team colors were displayed. Jerry was a long time member of The Journey Wesleyan Church. He enjoyed all things family with his bride of 67 years, Shirley (Powers). His compassion for people extended into to his 40 plus year career choice as an educator. His emphasis was on special education, which he taught with his own creative style. A man to never sit idly, there were always daily plans to make, work to be done, cats to feed, a sports game to watch or an apple pie to eat. Jerry is survived and missed dearly by wife, Shirley Ann (Powers) Cook, and sons Jerry Junior (Ellen) and Douglas. He is also survived by four grandchildren, Andrew (Lidoinet) Cook, Amelia (Andree) Pusey, David Cook, and Rebekah Cook, and by one great-granddaughter, Lidoinet Denali Cook. Also surviving are several nieces and nephews. He is preceded in death by his parents, a sister and a brother. A memorial service honoring this larger-than-life man will take place on Friday December 3, 2021 at 3:00pm at the Reynolds Jonkhoff Funeral Home, with visitation one hour prior. Those wishing to make a long-lasting contribution may do so in Jerry’s honor to St. Jude’s Childrens Hospital. Jerry and his family are being cared for by the Reynolds Jonkhoff Funeral Home and Cremation Services. A man like this will be missed fiercely, leaving all a legacy to keep living.

The family of Gerald "Jerry" Cook Sr. created this Life Tributes page to make it easy to share your memories.