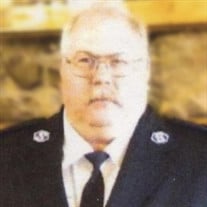 Gerald “Jerry” David Dafoe, Jr., 56, of Traverse City, Michigan passed away on Tuesday, May 11, 2021 at Munson Medical Center. Jerry was born on June 22, 1964 in Traverse City to Gerald and Diana Lee (Norcross) Dafoe, Sr. He married the love of his life Rosemary Jaworski on Feb., 16, 1990 in Traverse City. In his youth, Jerry worked and spent much of his time at a locally family-owned gas station, they later added a towing company. During his senior year of high school, Jerry began working in building maintenance. Over the course of his career, he had worked with; Pinestead Reef, Gas Compression Service and Star Truck Rental. He was also employed, as a maintenance man, with both the Traverse City and Cadillac Housing Commissions. He was lastly employed with Gerber Collison and Glass. In February of 1992, he adopted Rose’s daughter, Amy and son, Chris. He was a true people person; he had a great sense of humor. He loved talking with people at J&S Restaurant, Sparkey’s Diner and Holiday Gas Station on west bay. Among his other interests, he enjoyed John Deere tractors, the Buckley Old Engine Show, hot rod cars and old tow trucks. He also loved being outdoors boating and snowmobiling. Above all, spending time with his family was his greatest joy. Jerry is survived by his daughter, Amy (Ryan) Truman, mother, Diana Hickman, step-mother, Kay Dafoe, brother, Gary Dafoe and two sisters; Tammy (Chris) Liss and Sara Johnson. Also surviving are his grandchildren; Hali Godfrey, Monique Crump, Peyton Crump and Kota Crump as well as great-grandchildren; Liam Adams, Raelynn Boyer and many nieces and nephews. He was preceded in death by his father, Gerald Dafoe, Sr. and his son Chris, who died in a car accident in Gulfport, Mississippi. A Memorial Service honoring Gerald will take place at 11:00 a.m., with visiting one hour prior, on Saturday, May 22, 2021 at The Salvation Army, 1239 Barlow St., Traverse City, MI 49686. Lieutenant Matt Winters will officiate. Those planning an expression of sympathy may wish to consider a memorial donation to The Salvation Army, 1239 Barlow St., Traverse City, MI 49686. Please feel free to share your thoughts and memories with Jerry’s family at his tribute page at www.reynolds-jonkhoff.com. The family is being cared for by the Reynolds-Jonkhoff Funeral Home and Cremation Services.

The family of Gerald David Dafoe Jr. created this Life Tributes page to make it easy to share your memories.