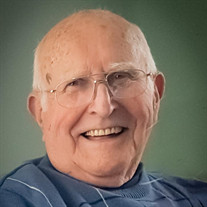 Gerald C. Dennis, Sr. died Thursday, August 15 at his home near Traverse City, surrounded by loved ones. He was 89. Jerry was born July 31, 1930 in Fenton, Michigan to Clair and Elaine Dennis. After graduating from Bay City Central High School in 1948 he moved with his family to help establish what would become Twin Cubs Farms near Empire in Leelanau County, raising cherries and producing maple syrup. That fall he enlisted in the U.S. Army and served four years in Europe. After completing military service he moved to Flint, Michigan and worked at a number of jobs while attending Radio Electronics and Television School. On Valentine’s Day 1953, in Flint, he met the love of his life, Eva May Elmer, of Glen Arbor. They were married July 18, 1953 and celebrated their 66th anniversary in 2019. Jerry was fearless about accepting new challenges and worked at many occupations, from a saxophone player in big bands to an entrepreneur in the television and computer industries. He served as a police officer in Flint from 1954 to 1960 before moving his family to Silver Lake and then Long Lake in Grand Traverse County, where he achieved his life-long dream of living up north on a lake. Most of his career he worked in educational sales, first as a salesman for Commercial Equipment in Traverse City, then as Midwest Regional Manager for McGraw Hill Publishers. In 1974 he moved his family to Louisville, Kentucky to be an independent dealer of Hoffman Educational Systems, remaining there until 1985, when he and Eva returned to their home on Long Lake. Jerry was loved by his family and his many friends for his sense of humor, his kindness, and his unflagging passion for life. He never sat still for long. He coached Little League baseball and helped found and served on the Long Lake Volunteer Fire Department. He took his family fishing, hunting, and camping throughout northern Michigan and Ontario; played country guitar and sang, played tennis, rode snowmobiles, boated, water-skied, explored two-tracks in his Jeep, searched for treasure with his metal detector, and designed and built countless gadgets in his workshop. He was a pioneer in fishing for Great Lakes coho and Chinook salmon, beginning with the first runs in Platte Bay in 1967. He enjoyed playing euchre, was a formidable poker player, and was proud to serve as an elder at Long Lake Church. He is survived by his wife, Eva; his children Melissa Adams of Frankfort, Rick (Susan) Dennis of New York, NY, and Jerry (Gail) Dennis Jr. of Traverse City; six grandchildren; one great-grandchild; a sister, Joyce Brooks of Avon Park, Florida; and many nieces and nephews. He was preceded in death by his parents and his brother, Jack Dennis. Funeral services will be held at the Long Lake Church on Wednesday, Aug. 21, 2019. Visitation will be from 10:00 to 11:30 a.m. and services will begin at 11:30 a.m.; a luncheon is to follow. Jerry and his family are in the care of the Reynolds-Jonkhoff Funeral Home and Cremation Services.

Gerald C. Dennis, Sr. died Thursday, August 15 at his home near Traverse City, surrounded by loved ones. He was 89. Jerry was born July 31, 1930 in Fenton, Michigan to Clair and Elaine Dennis. After graduating from Bay City Central High School... View Obituary & Service Information

The family of Gerald C. Dennis Sr. created this Life Tributes page to make it easy to share your memories.