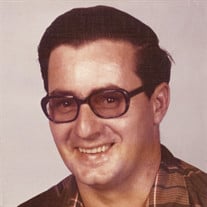 Gerald Francis Dittrich, 78, of Williamsburg , passed away Monday, August 13, 2018 at his home. Jerry was born on Friday, September 22, 1939 to the late Fred and Lucille (Trombley) Dittrich in Mount Clemens. He married Louella P. Clark on Saturday, August 16, 1958 in Elk Rapids and together they raised four children. For over 40 years, Jerry was employed as a mobile home service man. He also served for over 30 years with the Whitewater Township ambulance and fire department. Jerry enjoyed working on cars, especially restoring cars and was proud of the 1946 Ford he restored. He enjoyed deer hunting, working puzzles, watching birds and was an avid reader. Most importantly, Jerry was devoted to his family and enjoyed the time spent with them, with Christmas and other holidays at the top of the list. Jerry loved his family, and especially enjoyed being around all of the new babies in his family. Jerry is survived by his wife, Louella; children, Jerry (Heather) Dittrich and Cindy Sander, all of Williamsburg, Jeff (Linda) Dittrich of Traverse City, Alan Dittrich of Williamsburg, 7 grandchildren and 4 great grandchildren. He was preceded in death by his parents and his brothers and sister, Bud, Tom and Caroline Murphy. Visitation for Jerry will take place beginning at 1 p.m. Saturday, Aug. 18 at the Reynolds-Jonkhoff Funeral Home with the funeral service beginning at 2 p.m. Burial will be in Grand Traverse Memorial Gardens. Because Jerry loved all animals, memorial contributions to The Cherryland Humane Society, 1750 Ahlberg Rd., Traverse City, MI 49686 would be appreciated by the family.

The family of Gerald Francis Dittrich created this Life Tributes page to make it easy to share your memories.