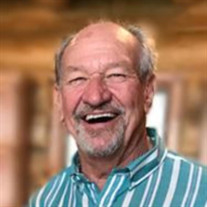 Gerald “Jerry” A. Triltsch, 80, of Lake Ann, Michigan passed away on Monday, August16, 2021 at Munson Medical Center. Jerry was born on March 7, 1941 in Detroit, Michigan to the late Alexander and Helen (Gaugh) Triltsch. He married the love of his life, Carol Johnson, on September 12, 1959 in Detroit, MI. They enjoyed 56 years of marriage and some of their favorite pastimes included camping, motorcycle rides, boating, spending winters in Green Valley, AZ, and traveling to Alaska. Carol preceded him in death on August 18, 2015, which left a void in Jerry’s heart. Jerry was a retired police officer and began his career in law enforcement in the early 1960’s at the Garden City Police Department. He then joined the Westland Police Department as one of the original 32 police officers on October 24, 1966, where he later retired as a Lieutenant in 1990 after over 24 years of service. He was a member of the Elks Lodge in Traverse City and loved working out and going to the gym where he earned many weightlifting awards. He also enjoyed firearms and had a true passion for classic cars. He attended countless car shows and was a member of the Santa Cruz Valley Car Nuts. Jerry also loved tinkering in his garage, fixing things, and working in the yard, but when 4pm came around it was time for “Happy Hour” on the back deck. Most times that included a scotch for Jerry and a manhattan for Carol, and they were often joined by their kids and grandkids who would fetch a pop out of the left door of the refrigerator and meet them outside for a good game of croquet. Spaghetti dinner or something on the grill would typically follow, and then the whole family would take a pontoon ride straight out from the house to the deep for an after-dinner swim. These are some of his fondest memories. Jerry is survived by a daughter and two sons; Marla (David) Bidwell, Glen Triltsch and Lee (Yvette) Triltsch, six grandchildren; Brianna, Corey, Brooke, Zachary, Jared, and Olivia, as well as great-grandchildren; Layla, Charlotte, Henry and Easton. Also surviving are two sisters; Nancy (Jim) Massolia and Shirley (Curt) Bingham. He was preceded in death by a sister, Linda VanVliet. A Funeral Service honoring Gerald will take place at 11:00 a.m., with visitation starting at 10:00 a.m., on Monday, August 23, 2021 at the Reynolds-Jonkhoff Funeral Home, 305 Sixth St. Traverse City, Michigan 49684. A public virtual webcasting of the funeral will be at www.rjfh.tv. Burial will follow in Lake Ann Cemetery. Those planning an expression of sympathy may wish to consider a memorial donation to Parkinson’s Network North, P.O. Box 5734, Traverse City, Michigan 49696. Please feel free to share your thoughts and memories with Jerry’s family at his tribute page at www.reynolds-jonkhoff.com. The family is being cared for by the Reynolds-Jonkhoff Funeral Home and Cremation Services.

The family of Gerald "Jerry" A. Triltsch created this Life Tributes page to make it easy to share your memories.