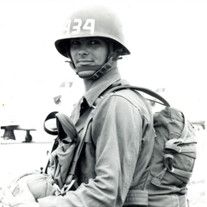 TRAVERSE CITY – Gerald “Pa” Lee Running, age 81, of Traverse City, passed away on Wednesday, August 28, 2019 at Munson Medical Center in the loving care of his family. Gerald was born in Warren, OH on February 25, 1938 to Eugene and Florence (Castile) Running. Gerald grew up in Warren, OH and later in Pennsylvania, and joined the Military Force in 1957 in Campbell, KY where he was a part of the 101st Airborne Division. It was while Gerald was in the Army that he met his wife, Lynn (Gibson) Running, and together the two married on January 3, 1961 in Tennessee. Gerald was honorably discharged from the Army in 1961. After the two were married, Gerald worked on the pipelines all over the country, starting out in Oklahoma and moving wherever he was needed. Gerald and Lynn eventually made their way to Traverse City where Gerald went to work for DeWayne’s Power Equipment, first in Kalkaska, then in Traverse City as a mechanic. He also worked for United Tech as a maintenance supervisor where he eventually retired from. Together, Gerald and Lynn thoroughly enjoyed going to the casino together. Every year they would get their “gang” together as they were called, where the groups of couples would map out their stops along the way to Texas. They would escape the winter months in Michigan for the warm sun in Texas. Gerald and Lynn always enjoyed spending the summer camping with the family at the Timberline Campground in Benzonia. Gerald was a devoted husband, father, and grandfather, he will be dearly missed by all that knew him. Gerald is survived by his wife, children; Debbie (Rob) Tyler, Jerry (Amy) Running, grandchildren; Katie (Bob) Layman, Eric (Abby) Breece, Jenna Running, Sarah Running, great-grandchildren; Izabelle, Addyson, and Bobby. Gerald is also survived by; William Gibson, Ally and Jacob Kleidon, Will Gibson, and his brother, Lou (Dorothy) Running, along with many nieces and nephews. Gerald was preceded in death by his parents, and brother, Merle Running. A visitation for family and friends will take place from 10:00 – 12:00 pm on Sunday, September 1, 2019 at the Reynolds-Jonkhoff Funeral Home. Military honors honoring Gerald will take place at 12:00 pm at the funeral home. The family asks that memorial contributions be directed to, Wounded Warrior Project, P.O. Box 758516, Topeka, Kansas 66675-8516.

The family of Gerald "Pa" Lee Running created this Life Tributes page to make it easy to share your memories.