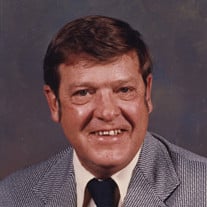 TRAVERSE CITY — Gerald D. Robinson, 89, of Traverse City, passed away on April 15, 2014. Gerald was born in Battle Creek on July 15, 1924, to the late Hiram and Mildred (Soules) Robinson. He graduated from Battle Creek Central High School and after graduation he enlisted and honorably served his country in the United States Army during World War II as a military policeman. He earned an accreditation in accounting degree from Agrubright College and worked for the Battle Creek firm of Black & Skaggs Association. In 1954 he relocated to Traverse City and managed his own accounting firm, Professional Management, until retiring in 1993. His financial talent along with Dr. Sladek was instrumental in establishing a $1.2 million building fund for Munson Medical Center. He married Elfriede “Freddi” (Semmler) Robinson on Dec. 29, 1960, at the First Congregational Church of Traverse City, and the couple lived in a dozen homes throughout Traverse City with his favorite being their 160-acre farm in Empire, where they raised animals and harvested fruits and crops. Gerald was a member of the First Congregational Church, Munson Medical Center Centurion Club donor, Masonic Mason Life Member of Lodge 222, Traverse City Golf and Country Club, Elks and Grand Traverse Yacht Club, where the couple enjoyed sailing their Flying Dutchman sailboat. He especially enjoyed traveling, riding his Harley Davidson on trips over the bridge, bowling, playing golf, and once hit a “hole-in-one” on hole nine of the old Cedar Run Golf Course. He will be missed terribly by “Benjie,” his loyal Airedale. Gerald is survived by his wife, Freddi; daughter, Sheri (Ray) Bays; and brothers, Kenneth (Elaine) Robinson and Lyinn Robinson. He was preceded in death by his parents; a son, Gerald H. Robinson; sister, Margret Convis; and brother, Wayne Robinson. A visitation will be held on Monday, April 21, 2014, from 3 to 5 p.m., at the Reynolds Jonkhoff Funeral Home. In lieu of flowers, a memorial contribution may be made to the Father Fred Foundation, 826 Hastings St., Traverse City, MI 49686 or the Cherryland Humane Society, 1750 Ahlberg Road, Traverse City, MI 49686. Gerald’s family would like to thank Dr. Sarah R. Seaver for her dedicated service to Gerald, the staff on the fourth and seventh floors of Munson Medical Center and French Manor, staff at Integrity and the very special love given from Hospice of Michigan. Please feel free to share your thoughts and memories with Gerald’s family by visiting www.reynolds-jonkhoff.com. Arrangements for the family have been entrusted to Reynolds-Jonkhoff Funeral Home and Cremation Services.

The family of Gerald D. Robinson created this Life Tributes page to make it easy to share your memories.