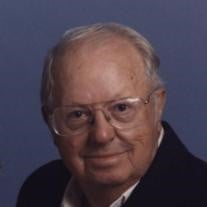 Gerald L. Stuber, 88, of Traverse City died Sunday, July 08, 2012 at Tendercare-Birchwood in Traverse City. Gerald was born on Sunday, November 18, 1923 to the late Jesse and Mae (Harris) Stuber in Mount Pleasant, MI. He married the former Mary Lou Miller in 1948 in Mt. Pleasant at the rectory of Sacred Heart Catholic Parish and together they raised nine children. Beginning his career as a mechanic in the oil fields, Jerry was exempt from military service as his work in the oil fields was essential to the war effort. He later became an auto mechanic, and was a very good one at that. In his spare time, he enjoyed watching TV, camping and going on drives with his wife. Jerry is survived by his wife Mary Lou; by their children, Gerald (Margaret) of Texas, Mark of Traverse City, Joanne (Ted) Gray of Waterford, Karl of Mackinac Island, Patricia (Matt) Wilson of Dowingtown, PA, Eric (Brooke) of Lansing, Barbara Stuber of Haslett, Tyrone (Jodi) of Weidman and Pamela (Tony) Stuber-Coble of Okemos. Also surviving are 5 grandchildren, 1 great grandchild and his brother John. He was preceded in death by his parents and his siblings, Elizabeth, Elbert, Elouise, Betty and Everette. Funeral services will be held at 11 a.m. Wednesday, July 25 at The Reynolds-Jonkhoff Funeral Home with Father Ken Stachnik officiating. Burial will be in St. Philip Neri Cemetery at Empire. Friends may call at the funeral home beginning one hour prior to the service. Memorial contributions may be directed to HopeWell Ranch, 650 N. School Rd., Weidman, MI 48893, a non profit organization run by his son Tyrone to help those with emotional, spritual and physical needs through riding, care and interaction with rescued horses or to the St Francis Food Pantry. Please share thoughts with Jerry's family by way of his online guest book at www.reynolds-jonkhoff.com. The family is being served by the Reynolds-Jonkhoff Funeral Home and Cremation Services.

The family of Gerald L. Stuber created this Life Tributes page to make it easy to share your memories.