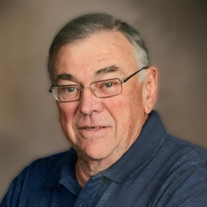 Gerald Anthony Francis Swaney was born in Traverse City, Michigan on the 3rd of July, 1940. He was the fifth child of Elmer Alexander and Lillian (Magee) Swaney. Gerry attended Traverse City St. Francis High School, (class of 1958), and later graduated from Michigan State University. He was a lifelong supporter of the Spartans – in part because that is where he met his wife of more than 55 years, Ann Elizabeth (Brainard) Swaney. Gerry and Ann were married at the Michigan State University Alumni Chapel on April 30,1966. In 1969, the couple moved to Clear Lake City, Texas where Gerry worked as an engineer for the NASA Manned Spacecraft Center, designing food and beverage packaging used for Apollo Missions 11-17, as well as two of the Skylab missions, and the Tektite II habitat in the Virgin Islands. An important memory for him was the three weeks spent on an Apollo recovery ship. In 1971, the couple welcomed their daughter, Elizabeth Jane, and in 1976 their son, Paul Alexander. The family would move to Warwick, New York (International Paper), and then Kankakee, Illinois (General Foods), where they welcomed their son Steven Gerald in 1978. In 1980, the family settled in Old Mission, Michigan where Gerry’s family had its roots, dating back five generations. Gerry became an integral part of the community, doing engineering work for Traverse City Canning and Coding Products. He was also instrumental in the creation of the School District’s Manufacturing Technology Academy, then located at Northwestern Michigan College’s Aero Park Campus. At Old Mission Peninsula School, Gerry coached basketball and track & field for over 13 years, continuing to coach even after his kids moved on to middle school. Coach Swaney continued his dedication to educating youth through sports as the Varsity Girls Basketball Coach at Forest Area High School, where he led the Lady Warriors to a District championship and was named by the Record-Eagle as Grand Traverse Area Coach of the Year in 1993. He helped build Forest Area’s Track & Field Program through coaching and fundraising for a new running track. Later he lent his talents to coaching the Buckley Bears for several years and proudly concluded his career by coaching two of his granddaughters at Suttons Bay. Gerry was an avid farmer and gardener, growing cherries, apples, raspberries, asparagus, onions, squash, potatoes, tomatoes, and numerous other crops on the family farm where generations before had also cultivated the land. Gerry was a loving husband, father, and grandfather. He is survived by his wife, Ann; their three children; Liz (Jon Lint), Paul (Jenny Brady), and Steve (April Shultz); and his five grandchildren Kaitlyn Ann Lint, Lauren Elizabeth Lint, Daniel Ryan Lint, Megan Jane Lint, and Owen Paul Swaney. Also sister Virginia Swaney Bennett, sisters-in-law Jane Brainard and Jeanette Denoyer (Don) Swaney, and many nieces and nephews. He was preceded in death by brother Donald, and sisters Shirley Smaha and Lorraine McNabb. Gerry passed away in his sleep, with family present, at 3:31am on Sunday, December 12th, 2021. He died on the same land where his father had been born more than 119 years earlier. He was a warm, sincere, funny, and devoted man, and he will be dearly missed. A public Celebration of Life is planned for Gerry’s birthday next July 3rd. Cremation has occurred and he will be interred in the Ogdensburg Cemetery, Old Mission Peninsula. If you are inspired to make a charitable contribution on his behalf, the family would encourage donations per his wishes to Grand Traverse Regional Land Conservancy, Old Mission Peninsula Historical Society, or to any youth sports organization you care to support. Those wishing to share memories and condolences may do so on Gerald’s tribute page, www.reynolds-jonkhoff.com

The family of Gerald Swaney created this Life Tributes page to make it easy to share your memories.