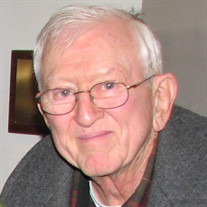 Gerald Thomas White, 90, of Maple City, passed away peacefully on Sunday, January 17, at Grand Traverse Pavilions in Traverse City, Michigan. Jerry was born September 2, 1930, in Traverse City, MI, the only child of Esther (Lautner) and Thomas White. He married Vivian Butler on Oct. 8, 1949, at the United Methodist Church in Reed City, MI. Those who knew him best describe him as a gentle soul who was a dedicated steward of our world’s natural resources. Jerry lived his early childhood in Shepherd, MI before his parents moved to Bridgeport, MI. He had a paper route and ran a trap line for personal income. He enjoyed target shooting and was in the school’s target rifle shooting club that practiced at Saginaw Arthur Hill high school, from where he graduated in 1948. During his youth, he was profoundly influenced by the time he spent on his mother’s family farm in Solon Township. After maintaining an orchard and an extensive garden during his working years down state, Jerry returned to Leelanau County to become a hobby farmer when he retired. After graduating from high school, Jerry attended Central Michigan University where he met Vivian during his freshman year. They married in the fall of their sophomore year, and their adventure began. After two years at Central, Jerry was accepted at the Kansas City College of Osteopathic Medicine. These were lean years for the young couple; Vivian taught school to provide a modest income while Jerry studied medicine at a card table. Their adventure continued when the couple moved to Trenton, Michigan, where Jerry served his internship and residency in anesthesia at Riverside Osteopathic Hospital. Vivian continued teaching as the couple settled into their new life. It was during this time that Jerry contracted polio. While this impacted his life dramatically, Jerry adapted and persevered. Jerry practiced at Riverside Osteopathic Hospital for the entirety of his career. Jerry served as Department Head and Chief of Staff at various times during his tenure. He was a member of the American Society of Anesthesiologists and was a fellow of the American Osteopathic College of Anesthesiologists. He retained fond memories of his friends and colleagues from ROH. Vivian and Jerry returned home to his roots in Leelanau County when he retired in 1987. Within a couple of years, they bought a hobby farm in Kasson Township where they could garden and expand an existing apple orchard. Jerry enjoyed growing sweet corn and pumpkins to sell from his farm stand. Jerry was also a steward of his forested property, establishing a 30-year forest management plan and earning MAEAP certification for Forest Management on his farm. Balsam Fir trees planted early in Jerry’s time on the farm were donated in recent years to the Cedar/Maple City Lion’s Club, which were then purchased to be used for the Christmas tree at the center of the Fox Motor’s “Toys for Tots” display. Jerry was a board member serving the Leelanau Conservation District for more than 25 years. He was a dedicated member of the Cedar/Maple City Lions Club and was awarded the Melvin Jones Fellowship for his services over the years. In 2017, after 67 years together Vivian preceded Jerry in death. Jerry is survived by his loving children, grandchildren, and great grandchildren: Gerald Thomas (Melissa) White Jr., Paul White, Dr. David (Debbie) White, and Mary Howard; Grandchildren Katie (Todd) Keating, Steven and Emily Perry, Emilee, Matthew and Annika White, Benjamin, Tyler, and Morgan Grimm; Lillian Adele and Mason Howard; Great grandchildren Aubrey Ann White, Rory Keating, Gracie Jane and Jack Perry, and Blakely Grimm; Sister-in-Law Helen Butler, nephew Bill (Heather) Butler. A Celebration of Jerry’s life will take place at 3:00 p.m., with visitation starting at 2:00 p.m., on Sunday, June 13, 2021, in the garden, at the Reynolds-Jonkhoff Funeral Home. The family would like to thank Grand Traverse Pavilions and Hospice of Michigan for their patience and care during this time. In keeping with Jerry’s tradition, in lieu of flowers, memorials may be made to a charity of your choice. Jerry and his family are being cared for by the Reynolds Jonkhoff Funeral Home.

The family of Gerald Thomas White created this Life Tributes page to make it easy to share your memories.