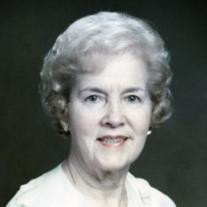 Geraldine Spicer Ford Dancy passed away peacefully on August 25, 2012, at Orchard Creek Supportive Care. Geraldine was born on July 8, 1914, In Highland Park, Michigan, to the late William and Rhoda (Spicer) Wakely. She married Harry William Ford on September 1, 1933, at the Highland Park Presbyterian Church. They were married for forty years until Harry’s death in 1973. Geraldine married Richard H. Dancy, Sr. in 1978. Richard preceded her in death. Geraldine graduated from Highland Park High School, where she was a member of the varsity swim team. It was there that she met Harry, an outstanding swimmer on the team. Gerrie continued to swim throughout her life. Exercise was very important to her and she continued walking regularly and riding her exercise bike well into her nineties. Gerrie and Harry settled in Detroit to raise their four children, with Gerrie serving as a Sunday school teacher and Cub Scout den mother. After their move to Franklin Village, Gerrie was a member of the Franklin Community Church Circle. She also volunteered years of service at St. Joseph Hospital, Bloomfield Hills, Michigan. Gerrie later divided her time between her home in Boca Raton, Florida, and her residence in Michigan. She also particularly enjoyed the time she spent at the family cabin on the Manistee River. Gerrie loved to paint, embroider, sew, and in her words, “anything that could be done by hand”. Her life-long passion was bridge. She belonged to many bridge clubs, earned Masterpoints, and until just recently, played weekly. She was also a life-long fan of the Detroit Tigers. The last game she attended was on her ninety-third birthday with her entire family in attendance. Gerrie was a world traveler; traveling extensively on business trips with Harry, and later with family, friends, and the travel group, The Nomads. She was a great believer in keeping her family close together. She planned and arranged thirteen family reunion trips, both in the U.S. and abroad. Geraldine was pre-deceased by her sister, Lucille Powless. She is survived by her four children, Brenda (Dave) Cheshire of Orchard Lake, Michigan, Richard (Susan) Ford of Traverse City, Candace (James) Brody of Traverse City, and Gary (Lou Anne) Ford of Traverse City; her grandchildren, David Cheshire, Kenneth Cheshire, Deborah Perrin, Lisa Brody, Wendy Ford, Bart Ford, Robin Furlong, Beau Ford, and Marissa McClintock; her great-grandchildren, Michael Cheshire, Krysia Cheshire, Sierra Cheshire, Courtney Cheshire, Anna Perrin, Matt Perrin, Charlotte Furlong, Henry Furlong, Fletcher Ford and Brewer Ford. The family extends its sincere appreciation to the staff of Orchard Creek Supportive Care for their kindness and the compassionate care Gerrie received during her entire stay. Geraldine will be buried in White Chapel Memorial Cemetery, Troy, Michigan, with a private graveside service. Her life will be further celebrated by her entire family at a fourteenth family reunion. Memorials to Geraldine may be made to the charity of your choice. The family has been served by the Reynolds-Jonkhoff Funeral Home. Please sign Geraldine’s online guestbook at www.reynolds-jonkhoff.com

The family of Geraldine Spicer Ford Dancy created this Life Tributes page to make it easy to share your memories.