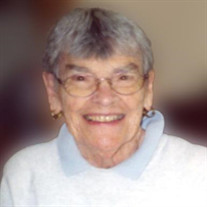 Geraldine M. Brunet, 92, of Empire passed away peacefully on March 3, 2018 at the Grand Traverse Pavilions surrounded by her family. Gerry was born on October 28, 1925 in Empire, Michigan to the late Philip and Effa (Baatz) Payment. She married the love of her life Henry “Hank” Brunet on August 24, 1946 in Sault Ste. Marie, Michigan. He preceded her in death on December 8, 2012. She graduated from Empire High and later attended Central Michigan University. She taught school on South Manitou Island. She met Henry on South Manitou. Gerry was a member of St. Philip Neri Catholic Church, she volunteered for the Red Cross, at libraries and with Empire Heritage Museum. Gerry was a supportive military wife for over 30 years, living in many locations while Henry actively served in the U.S. Coast Guard. Gerry is survived by her children, Michael (Mary Lee) Brunet of Manitowoc, WI and Melanie “Mimi” Brunet of Michigan City, IN, and a daughter-in-law, Susan Brunet of Empire. Also surviving are 5 grandchildren, 11 great-grandchildren and a sister, Betty Bolton of Empire, as well as many nieces and nephews. She was preceded in death by her husband, Henry, a son, Patrick Brunet and a brother, Max Payment. Gerry’s family would like to extend a heartfelt thank you to nurses and staffs of Hospice of Michigan and the Grand Traverse Pavilions for their loving care of Gerry. Friends are welcome to visit with Gerry’s family starting at 6:00 p.m. on Friday, May 11, 2018, with a Rosary following at 7:00 p.m. at St. Philip Neri Catholic Church, 11411 S. Lacore Rd, Empire, MI 49630. A Mass of Christian Burial, honoring Gerry, will take place at 11:00 a.m. with visitation starting at 10:00 a.m. on Saturday, May 12, 2018 at St. Philip Neri Catholic Church. Rev. Fr. Tony Cureton will officiate. Those planning an expression of sympathy may wish to consider a memorial donation to the Empire Library, Empire Heritage Museum or Glen Lake Fire and Rescue. Please feel free to share your thoughts and memories with Gerry’s family at www.reynolds-jonkhoff.com. The family is being cared for by the Reynolds-Jonkhoff Funeral Home and Cremation Services.

Geraldine M. Brunet, 92, of Empire passed away peacefully on March 3, 2018 at the Grand Traverse Pavilions surrounded by her family. Gerry was born on October 28, 1925 in Empire, Michigan to the late Philip and Effa (Baatz) Payment. She married... View Obituary & Service Information

The family of Geraldine "Gerry" M. Brunet created this Life Tributes page to make it easy to share your memories.

Geraldine M. Brunet, 92, of Empire passed away peacefully on...