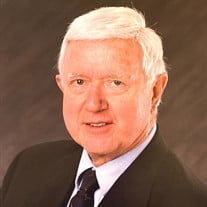 Born on January 30, 1933, in Grand Rapids, MI, to Louis and Florene (Tomczak) Jackowski. Attended Grand Rapids Catholic Central, and graduated from the University of Michigan. Joined the National Guard in 1954 and served until March, 1961. Married Dorothy Boguslawski (also of Grand Rapids) on September 6, 1958. They are parents of four children: Anita Jackowski, Susanne (Ron) Redburn, Paul (Angelis) Jackowski and Brian (Mary) Jackowski. They are grandparents of eight grandchildren: Ryan Redburn, Aaron Redburn, Blaine Redburn, Massimo Pineda, Shannah Bird, Charlotte (Mitch) Black, Necole (Dan) Beitzel, and Anthony (Tommlynn) Reno. They have five great-grandchildren. During his lifetime he was employed for ten years as an auditor with the State of Michigan, and also owned and operated accounting practices in Grand Rapids and Traverse City, Michigan. He was an active member of the Catholic Church, with some 45 years of service in the area parishes. Fourteen years were spent as lay administrator of Immaculate Conception Parish, serving four different pastors. He was also instrumental in the founding of St. Patrick Church as well as helping with the administration of the Grand Traverse Area Catholic Schools. He much enjoyed traveling with his wife, Dorothy, and their children, and covered some 44 of the States and over one million miles of road travel during his lifetime. Golfing and fishing were his favorite pastimes. He was a big fan of Michigan football and jazz aficionado. He also had a passion for cooking, baking, and fine wine. Holy Mass will be celebrated at St. Patrick Church, Traverse City, on Tuesday December 21, 2021 at 11:00am with visitation one hour prior to the Mass. Interment will be at Oakwood Cemetery in Traverse City.

Born on January 30, 1933, in Grand Rapids, MI, to Louis and Florene (Tomczak) Jackowski. Attended Grand Rapids Catholic Central, and graduated from the University of Michigan. Joined the National Guard in 1954 and served until March, 1961. Married... View Obituary & Service Information

The family of Gerard Jackowski created this Life Tributes page to make it easy to share your memories.