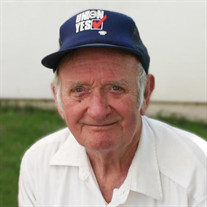 Gerard “Jerry” J. Kuhlman, 89, of Traverse City passed away on Tuesday, July 21, 2020 at his home. Jerry was born on March 5, 1931 in Grand Rapids, Michigan to the late James and Catherine (Ockert) Kuhlman. He married the love of his life Theresa Largent on December 1, 1973 in Traverse City. Jerry proudly served his country in the U.S. Army during the Korean War. He had been employed with Parsons Corp. and later Cone Drive, retiring in 1996. Jerry was a member of St. Francis of Assisi Catholic Church and the Cherryland V.F.W. Post 2780. He loved the Cedar Polka Festival and attended every year. He was also a member of the Dance Club. Jerry was a handyman, and over the course of his life he built his three homes. He always enjoyed good sauerkraut, deer hunting and calling BINGO. Jerry is survived by his loving wife of 46 years, Theresa, four sons and five daughters; Paul Weese, Terry Brinkman, Pam (Ed) Joslin, Tony (Cathy) Kuhlman, Peggy (Francis) Kuhlman, Tom Kuhlman, Phillip Weese, Tracey Weatherholt, and Kellie (Brent Mason) Kuhlman. Also surviving are a sister, Rita Hennessy, a daughter-in-law, Janet Weese, as well as many grandchildren, great-grandchildren and great-great-grandchildren. He was preceded in death by a son, Patrick Weese, a great-grandson, Eric Weese and 12 siblings. Friends are welcome to visit with Jerry’s family from 6:00 to 8:00 p.m. on Monday, July 27, 2020 at the Reynolds-Jonkhoff Funeral Home, 305 Sixth St., Traverse City, MI 49684. A Mass of Christian Burial will take place at 1:00 p.m. on Tuesday, July 28, 2020 at St. Francis of Assisi Catholic Church, 1025 S. Union St., Traverse City, MI 49684. Rev. Fr. Mitchel Roman will officiate. Military Honors will be conducted under the auspices of the Cherryland V.F.W. Post 2780 and American Legion Post 35. Those planning an expression of sympathy may wish to consider a memorial donation to the Cherryland V.F.W. Post 2780. Please feel free to share your thoughts and memories with Jerry’s family at his tribute page at www.reynolds-jonkhoff.com. The family is being cared for by the Reynolds-Jonkhoff Funeral Home and Cremation Services.

The family of Gerard "Jerry" J. Kuhlman created this Life Tributes page to make it easy to share your memories.