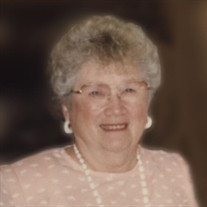 Gertrude Maxine Everson, 94, a life long resident of Traverse City passed away Wednesday, February 5, 2020 at Grand Traverse Pavilions in Traverse City. Gertrude was born on Saturday, August 29, 1925 to the late Guy and Altetha (Struble) Avery in Traverse City. She was a graduate of Traverse City High School. She married Roy R. Everson on Saturday, April 13, 1946 in Traverse City. Gertrude retired from Pine Grove Homes in 1987, having been employed there as the secretary. She had been associated with Oak Park Congregational Church; attended the Grawn United Methodist Church. She was a member of the VFW Auxiliary, American Legion Auxiliary, Christian Women's Organization, and Senior Center of Traverse City. She enjoyed crocheting, knitting, handiwork, yard work, and Bingo. Suriviving Gertrude is her daughter in law, Pam Everson of Traverse City; sisters in law, Joann Avery of Traverse City and Joan Everson of Suttons Bay and several nieces and nephews and cousins. She was preceded in death by her parents, her husband, sons David and Dennis and her brothers Guy and Raymond, sister Beatrice Wylie. and brothers in law Elmer and Ever Everson, sister in law Alma Holsather, and several cousins, including a special cousin, Betty Routsong. A graveside service may be held in the spring of the year at Grand Traverse Memorial Gardens with the date and time to be published at that time. Please consider Blair Township Emergency Services, 2121 County Road 633, Grawn, MI 49637 as a way to memorialize Gertrude.

The family of Gertrude Maxine Everson created this Life Tributes page to make it easy to share your memories.