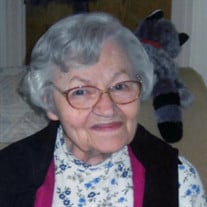 Gertrude “Trudy” Charlotte Broghamer, 93, peacefully passed away on Friday, July 10, 2020 in the care of family at Grand Traverse Pavilions. Gertrude Charlotte Mallwitz was born on August 28, 1926 in Girschunen, East Prussia, the daughter of Ewald and Luise (née Mehs) Mallwitz. She spent her childhood and younger years during the terrible World War II in Germany. In 1944, the Russian Army invaded East Prussia and forced the family out of their homestead, never to return. They fled to Berlin with the Russian troops on their trail and survived aerial bombings until the end of World War II. Trudy immigrated to the United States in 1953 and became an American citizen in 1958. On August 28, 1954 she was united in marriage to Frederick “Fred” J. Broghamer at St. Francis of Assisi Catholic Church in Traverse City. Together they celebrated 60 years of marriage before his passing in 2015. A bookkeeper and stenographer, Gertrude was a 1944 graduate of the Business School in Tilsit, East Prussia and continued her work in Berlin. Upon arrival in the U.S.A. she worked at the Traverse City State Bank and Tri-County Health Department. Trudy enjoyed music, poetry, and a love for animals. Gertrude is survived by her sister Margaret Sewell of Tyler, TX, and brother Hans (Judy) Mallwitz of Traverse City. She is preceded in death by her husband Fred, parents, sisters Frieda Mallwitz and Erna Hildegaard, and brother Gerhard Mallwitz. Fred and Trudy will be laid to rest together at Grand Traverse Memorial Gardens. Those wishing to make a gift of remembrance in honor of Trudy are asked to consider the Humane Society. The family would like to extend their sincere thanks and appreciation to Kari and Jen at Heartland Hospice, and all of those whom made Trudy comfortable in her final days. Trudy and her family are in the care of the Reynolds-Jonkhoff Funeral Home and Cremation Services.

The family of Gertrude "Trudy" Charlotte Broghamer created this Life Tributes page to make it easy to share your memories.