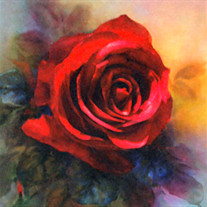 Virginia (Ginny) Mae Fiegel, 84, of Traverse City passed away November 28, 2019 at Munson Hospice House with her family at her side. Ginny was born on July 9, 1935 to the late William and Jennie (Hepola) Landgraf. She attended the Piper Elementary School in Berwyn, IL. Her family moved to Sebeka, MN in 1947 where she finished high school. During her high school years she enjoyed playing the baritone in the marching band. She graduated from St. Cloud State University with a degree in speech therapy. Virginia met the love of her life, Richard M. Fiegel while working food service at Interlochen National Music Camp: they were married on June 14, 1958. In 1971 they moved with their 3 children, Pam, Lynn and Mark, from Ann Arbor to Traverse City. They spent many wonderful summers at Interlochen, where Ginny ran the camp Scholorshop (gift store). Ginny was a Docent at the Dennos Museum, as well as volunteering at the Library gift store and with the Traverse City Film Festival. She loved the arts, and was an avid supporter of the TSO, the Met opera series at the State Theater and various other local arts events and causes. She enjoyed cooking, reading, painting and weaving. She took many wonderful trips and saw many different countries and was always excited to learn about new cultures. Virginia enjoyed a good glass of wine, a Saturday night pizza, and spending time with her family. Surviving are her children, Pamela (John) DeVol, Lynn (Jerry Foley) Fiegel, Mark (Jackie)Fiegel,; grandchildren Shannon Elizabeth and Max Richard Fiegel; many step-grandchildren, great grandchildren and friends. Virginia is preceded in death by her parents and her beloved husband Richard. A visitation will be held from 4-6:30 at the Reynolds-Jonkhoff Funeral Home on Monday, December 2, 2019. Memorial contributions may be directed to the Dennos Museum or to Munson Hospice.

Virginia (Ginny) Mae Fiegel, 84, of Traverse City passed away November 28, 2019 at Munson Hospice House with her family at her side. Ginny was born on July 9, 1935 to the late William and Jennie (Hepola) Landgraf. She attended the Piper Elementary... View Obituary & Service Information

The family of Ginny Fiegel created this Life Tributes page to make it easy to share your memories.