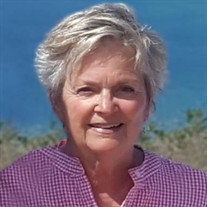 Mary Virginia “Ginny” Toal suddenly, but peacefully, passed away on November 22, 2020 in Glen Arbor, MI, a place that she loved. Ginny was the wife of Michael “Mike” Toal. They shared over 56 years of marriage together. Born in South Bend, Indiana in 1945, Ginny was the daughter of J. Patrick and Mary Patricia “Patsy” (Donahue) Leyes. She attended St. Joseph grade school and St. Mary’s Academy. She married Mike in 1964 and they remained in South Bend, where they raised their two children, for nearly 50 years. Devoted wife, mother and grandmother, she actively volunteered in the communities she lived in, notably the Junior League of South Bend as well as Morris Park Country Club; the Glen Arbor Art Association as well as the Empire Area Food Bank. Ginny enjoyed playing tennis for many years and golf until the end (although her short game left much to be desired). She was also an avid outdoors-person and enjoyed biking and hiking in her beloved Leelanau County, where she and her family vacationed for many years and eventually made their home, which she described as a dream come true. Ginny was preceded in death by her parents as well as her brother Joseph. She is survived by her husband, Michael, her son, Christopher (Kim) and her daughter, Laurie (Kepler) Funk as well as her sisters: Barbara (Robert) Sorenson, Mary Patricia (Richard) Nussbaum and Julie (Robert) Richter; and by her much-loved grandchildren: John “Jack” Toal, Megan Toal, Kevin Toal, Zachary Funk, Margaret “Maggie” Funk and Bridget Funk. A celebration of Ginny’s life will take place at a later date and will be announced as updates become available. Memorial gifts can be made in the name of Mary V. Toal to the Community Foundation of St. Joseph County, PO Box 837, South Bend, IN 46624. Those wishing to share a condolence my visit Ginny’s tribute page at www.reynolds-jonkhoff.com

The family of Ginny Toal created this Life Tributes page to make it easy to share your memories.