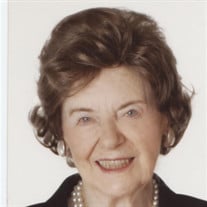 Gladys Irene Schichtel passed away peacefully in her home on November 16, 2016 after a short illness. She had celebrated her 102nd birthday in June. Gladys was born on June 3, 1914 in McFall, Missouri and grew up on a farm near Oberlin, Kansas. She was an excellent student and dreamed of becoming a teacher. After graduating from high school, she started teaching in a one room schoolhouse. She was required to start a fire, cook a hot lunch, clean the school and teach all grades for a monthly salary of $34.00. Gladys later graduated from Ft. Hays Kansas State College and completed many post-graduate courses at Michigan State University. Gladys' career in teaching later took her to Salina, Kansas, where she taught first grade at Hawthorne School. WWII was underway, and, while serving fudge at the local USO, Gladys met her future husband and love of her life: George Schichtel. George was a farmer and master mechanic, who was training in the U.S. Army Air Corps (predecessor to the Air Force). After wooing and winning Gladys' heart, George was stationed in Saipan and flew 30 missions over Japan in a B-29 (The "Honey") as the left gunner. Upon his return, Gladys and George were married on August 5, 1945. They were married 54 years and 10 months before George passed away. Gladys and George lived in the Traverse City area their entire married life, first in Kingsley and then in East Bay. Gladys taught generations of kindergarten students in Kingsley and Oak Park school until mandatory retirement at age 70. Everywhere she went, people of all ages would come up to her and say, "Do you remember me? You were my kindergarten teacher!" Some were quite young; some were grandparents, but they all remembered the teacher who introduced them to a love of learning. Gladys was a devoted mother to her daughters, Karen and Kay, and after her retirement, Gladys blessed her two granddaughters, Alison and Deanna, with her creative energies. She made extraordinary Halloween costumes and transformed her basement into a playroom with its own pretend fireplace. She loved to host Christmas, and that tradition continued every year until this past one, when Gladys was joined by her daughters, granddaughters, their spouses and her precious great-grandson, Alex. Gladys thoroughly enjoyed her 100th birthday and celebrated first in Wichita at the Reunion of the 73rd Bomb Wing, then at a luncheon with family in Chicago, and finally at an ice cream social on her patio, where local friends and family enjoyed a perfect July day. Many patrons of the Cherry Festival will remember George and Gladys' classic, cherry red 1957 DeSoto, which was featured in the Heritage and Grande Royale Parades for over 25 years, including the most recent one. Gladys loved to wave to the crowds, and this year she received a particularly loud applause when the announcer asked the crowd to wish her a happy 102nd birthday. In spite of some limitations, Gladys continued to live in her own home, and she attended the wedding of her youngest granddaughter in Wisconsin in July of this year. When asked whether she felt she could make the trip, Gladys announced, "I can do anything!" And she could. Gladys was preceded in death by her parents, her husband, George, and her sister, Elsie Watkins. She is survived by daughters, Karen and Kay Schichtel (Barry Lesht), her granddaughters, Alison Lesht (Jacob Crowe), Deanna Lesht (Paul Dovydaitis), great-grandson, Alexander Crowe, and her brother, J. Eldon Smith, and many loving nieces and nephews. A visitation will be held on Saturday, November 19, 2016 from 6 p.m. to 8 p.m. at the Reynolds-Jonkhoff Funeral Home. A funeral service will be held on Sunday, November 20, 2016 at 2 p.m. at Central United Methodist Church, with visitation beginning at 1 p.m. Pastor Dale Ostema will officiate services. A graveside service will be held at Grand Traverse Memorial Gardens immediately following. In her memory, contributions to the Cherryland Humane Society, 1750 Ahlberg Road, Traverse City, MI 49686 would be appreciated.

Gladys Irene Schichtel passed away peacefully in her home on November 16, 2016 after a short illness. She had celebrated her 102nd birthday in June. Gladys was born on June 3, 1914 in McFall, Missouri and grew up on a farm near Oberlin,... View Obituary & Service Information

The family of Gladys Irene Schichtel created this Life Tributes page to make it easy to share your memories.

Gladys Irene Schichtel passed away peacefully in her home on...