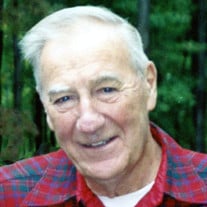 Glenn Frederick Larson, 88, passed away April 9,at the Grand Traverse Pavilions. Glenn was born October 10, 1925, the sixth son of Louis and Dorothea Larson in Barronette, Wisconsin. He attended Spooner High School and worked in his father’s logging camp until the time he enlisted in the Navy in 1943. Always patriotic, he served with pride on three ships, the LST converted repair ship, Beleraphon, The APA Niagra, destined for A Bomb testing at Bikini and the mine sweep, Minah. In 1947 he married the former Marian Conant, who survives. Also surviving are his children; G. Christian (Kelli) Larson of Hawaii, Robin (John) Murray of Quorn, Leicester, England and Melissa Larson of Grand Rapids. Also five grandchildren; Tiffany (Russell) Hodgson of New Zealand, Jennifer (Dan) Ham of Honolulu, Hannah Murray in Oklahoma, Sarah Larson of Oregon and Lt. Henry Murray of Fort Lewis in Washington, and two great-grandchildren, Alaska Hodgson and Max Ham, one brother, Lester (Bette) Larson of Barron, Wisconsin. Preceding him in death were his parents, brothers, Roy (Linda), George, (Lillian), Donald (Laverne), Joseph (Leila) and one sister, Myrtle Larson. In 1948 moved back to Grand Traverse area where he raised his family on Long Lake. He worked for over thirty years at Cone Drive, first in the shop then in management. He left there to go into business for himself, Viking Intl., doing sales and service work with world-wide contacts. He was a member of the Homestead Community Church and has been a faithful member of three Baptist Churches in his lifetime, serving in a number of offices and committees and always available for service projects. His interests included pheasant, duck, deer, moose and caribou hunting, trap shooting, ice fishing, and working in the woods. He was a perfectionist who had a preference for projects that offered a challenge and a sense of accomplishment. In 1994 he spent a month building a Tiger Course for the Seventh Day Adventist Kahili Mountain School in Kauai. Visitation for Glenn will take place on Monday, April 14, 2014 from 4-7pm at the Reynolds-Jonkhoff Funeral Home. Funeral services will take place at 11am with a visitation beginning at 10am. Burial will take place at Grand Traverse Memorial Gardens. In lieu of flowers memorial contributions may be made to The Homestead Community Church of Beulah or the Fife Lake Baptist Church.

Glenn Frederick Larson, 88, passed away April 9,at the Grand Traverse Pavilions. Glenn was born October 10, 1925, the sixth son of Louis and Dorothea Larson in Barronette, Wisconsin. He attended Spooner High School and worked in his father&#8217;s... View Obituary & Service Information

The family of Glenn Frederick Larson created this Life Tributes page to make it easy to share your memories.

Glenn Frederick Larson, 88, passed away April 9,at the Grand...