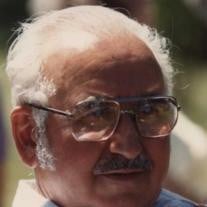 Glenn I. Rhoads, 94, of Leelanau County, passed away August 4, 2012 at Hope Village, with his family close by his side. Glenn was born on March 21, 1918 on the family farm in Wheeler, MI (Gratiot County), the sixth of seven children, to Charles and Myrtie Rhoads. He lived his early years on the family farm. As a young man, he was active in singing in his home church and community. In 1944 he married Alberta Coleman, daughter of Howard and Alma Coleman of Maple City, Michigan. In 1947, the couple moved with all of their dairy herd and tools to the farm in Leelanau County. Gradually the dairy farm was changed to a fruit operation, including cherries, plums, and apricots at Rhoadside Acres. Glenn also worked as a machinist at the Traverse City Iron Works for thirty two years, retiring in 1980. Glenn was always active in community affairs, serving on local school boards, and was director of the NW Michigan Farm Bureau. He also served as part of the Elmwood Township Planning Commission and was a township trustee for eight years. He was an active member of Emmanuel United Methodist Church/Traverse Bay United Methodist Church. Glenn always had a hymn of praise on his lips. Glenn loved to hunt, fish and operate his fruit and dairy farm. He enjoyed the outdoors and always tended a garden. Those who knew Glenn felt accepted and loved by him; he was easy to be around and easy to talk to. His grandchildren cherish memories of their "Gramps," including annual trips to the County Fair, homemade ice cream for family gatherings, fishing, harvesting fruit from the farm, playing dominos, and sharing M & Ms. But beyond the best of times and the sweetest of treats, Glenn is remembered for the way he loved his family, put others before himself and accepted strangers as friends. Gentle, sweet, kind and compassionate are words that define him well. He lived his life in a way that honored God and inspired others to do the same. Glenn is survived by his wife and best friend, Alberta Rhoads and their children, Ronald (Rebecca) Rhoads, of Cedar, Robin (Pat) Patterson, of Traverse City and Anne (Ted) Smith, of Traverse City. He will be fondly remembered by his grandchildren, Scott (Aubrey) Smith, and Kristin (Christopher) Michalowski, Erin Rhoads, Tamara Rhoads, and Heather (Ryan) Pfefferle, Amanda (Jason) Stuart, Ashley (Marc) Cunningham, and Brad Patterson; and eight and 2/3 great grandchildren. He was preceded in death by his parents and six siblings. For the past year he has been lovingly cared for by the staff at Hope Village in Williamsburg. If the wheelchair traveling down the hall had a hymn-singing passenger, it was Glenn. Visitation for friends and family will be held at Reynolds-Jonkhoff Funeral Home Tuesday, August 7th from 6-8 PM. A celebration of Glenn's life will be held Wednesday, August 8th at 11 AM, at Traverse Bay United Methodist Church (1200 Ramsdell St.) with Pastor Ted W. Smith officiating. Burial will take place at Grand Traverse Memorial Gardens. Memorial contributions may be directed to the Traverse City Salvation Army, P. O. Box 5228, Traverse City, 49696, (he was a bell ringer at Christmas time for many years), Church of the Living God, 1514 Birmley, Traverse City 49686 or Traverse Bay United Methodist Church, 1200 Ramsdell, Traverse City, 49684. Please visit www.reynolds-jonkhoff.com to share your thoughts and memories of Glenn with the family. The family is being served by Reynolds Jonkhoff Funeral Home and Cremation Services.

Glenn I. Rhoads, 94, of Leelanau County, passed away August 4, 2012 at Hope Village, with his family close by his side. Glenn was born on March 21, 1918 on the family farm in Wheeler, MI (Gratiot County), the sixth of seven children, to Charles... View Obituary & Service Information

The family of Mr. Glenn I. Rhoads created this Life Tributes page to make it easy to share your memories.