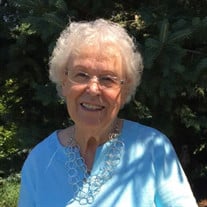 Gloria Mary Tabone (Lewis), 92, of Traverse City passed away July 26, 2020 peacefully at home with her daughters by her side. She was born March 30, 1928, in Glassport, PA, daughter to Andrew and Joanna Lewis. Her family moved to Detroit, Michigan when she was 5, then to Lincoln Park. Gloria worked as a key punch operator for New York Central Railroad in Corktown (Michigan Central Depot) for 22 years. She enjoyed many trips with friends to New York on a sleeper car. Gloria won medals dancing on roller skates at the Lincoln Park Roller Rink, which still stands today. While working for the railroad Gloria met her future husband, Pat Tabone. After their first date, which was by chance, they were together until Pat’s passing in 2005. They were married in 1958 and soon after moved to Garden City to start a family. In 1985, after Pat was relocated for work, Gloria moved to the Philadelphia area, where she and Pat were known for hosting their families and friends. They were the designated tour guides and took guests all over the region. Atlantic City was a favorite stop, mainly so Gloria could try her luck on the slot machines. Gloria and Pat enjoyed camping all over, visiting nearly all of Michigan’s State Parks, and several on the east coast. Mackinac Island held a special place in their hearts. After Pat’s passing Gloria took on a whole new sense of independence and split her time with her two daughters in Traverse City and Baton Rouge, LA. The time, was scheduled around her two bowling league’s schedules, of course. Gloria would then move to Traverse City permanently in 2010. Like a true social butterfly, she participated in all activities and trips at Bay Ridge, and when that wasn’t enough, she made her way to the senior center. She was an exceptional baker and a talented artist. In her spare time, she loved to paint, draw, cross stitch, crochet and do ceramics. Even more than the joy of doing these things, was gifting them to others. She was proud of her independence, keeping busy and driving pretty much to the end. She also bowled on her 90th and 91st birthdays. Although we miss Gloria already, she lived a long and fulfilled life. Gloria is survived by her children Gary Tabone, Sandra (Brian) Stimson and Cheryl Kelly; grandchildren Matthew, Tony (Carolyn), Breanne (Aaron), Patrick (Kristen) and Kayla; great-grandchildren Jesse, Gina, Jennifer, Sydney, Paige and Hudson; sisters Dorothy Delphy and Evelyn Werksma and other extended family and friends. She was predeceased by her parents; husband Pat; grandson Michael P. Kelly; son-in-law Dan Kelly and brother Andrew Lewis. A gathering in honor of Gloria’s life will take place Sunday, Aug. 16, from 4-6PM, outside in the garden at Reynolds-Jonkhoff Funeral Home. A funeral Mass will be celebrated downstate at a later date. Memorials may be directed to the Traverse City Senior Center or to St. Jude Children’s Hospital. To view her tribute page you may visit www.reynolds-jonkhoff.com

Gloria Mary Tabone (Lewis), 92, of Traverse City passed away July 26, 2020 peacefully at home with her daughters by her side. She was born March 30, 1928, in Glassport, PA, daughter to Andrew and Joanna Lewis. Her family moved to Detroit, Michigan... View Obituary & Service Information

The family of Gloria Mary Tabone created this Life Tributes page to make it easy to share your memories.