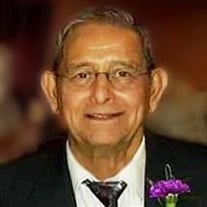 Gordon E Iacovoni, 85, of Traverse City passed away August 23, 2018 at Munson Medical Center with his family by his side. Gordon was born on February 15, 1933 in Grand Rapids to the late Dewey and Edna (Brownell) Iacovoni. At age 9, the family moved to Lansing where he later graduated from Sexton High School in June of 1951. He then attended Michigan State University for two years before joining the service in December of 1953. He served in the U.S. Army as an Artillery Forward and Sound Ranger Instructor. On July 24, 1954 Gordon married the love of his life, the former Evelene "Evie" Joyce Gattner at the First Christian Church Disciples in Lansing. Following his time in the service he returned to MSU where he graduated in 1957 with a degree in Police Administration. He started work at the State Prison of Southern Michigan, now known as Jackson State Penitentiary in 1957. While employed he furthered his education at Western Michigan University where he earned a Masters in Clinical Psychology. Gordon settled his family in St. Johns Michigan in August of 1962 where he established a wonderful group of friends. Always looking for more he waited for the perfect “double” promotion 1972 and moved the family to Traverse City in July of that year. A gregarious talker with lots of stories to tell he maintained the lasting friendships from St. John’s and developed strong new friendships in Traverse City. Gordon loved his work as well as the staff and supervisors that surrounded him. He was diligent, fair and compassionate towards the people he served. After 37 years, Gordon retired from corrections. During his retirement he enjoyed traveling to visit friends, relatives and national parks in their motorhome. They travelled from Key West, Florida to California to Nova Scotia. He was a member of the Traverse City Elk's Lodge and in his spare time assisted with the American Red Cross Blood Drives. Gordon wanted his friends and family to know: "I had a wonderful life. I married my best friend and lover. I had a wonderful family. We had wonderful friends. I had the best job with professional bosses, peers and staff. I had a wonderful retirement. My life was blessed with the best of everything that a person could expect. During adversities and confrontations, I felt I had an angel on my shoulder that always protected me. I hope everyone can have as great a life that I had. I wasn’t perfect, but my angel was there and protected me". Gordon is survived by his wife of 64 years, Evie (Gattner), children Son David and his wife Roberta of Midland ,Son Steven and his wife Teresa of Traverse City, (Twins) Janice of Waterford and Danny of Rockford; grandchildren Kristina and her husband Jared Marsh, Anthony and his wife Nicole Iacovoni, Dante Iacovoni, Jonathon Iacovoni, Dominic Iacovoni, Angelina Iacovoni; great grandchildren Isabelle Marsh. Gordon was preceded in death by his brother Kenneth Iacovoni and loving parents Dewey and Edna Iacovoni as well as Evie’s parents Dolph and Naomi Gattner. The memorial gathering celebrating Gordon's life will be held on September 1, 2018 at the Elks Lodge from 6 to 8 pm. He will receive military honors from the VFW Post #2780 and American Legion Post #35 at 6 pm. Memorial contributions in his honor may be directed to a charity of one's choice. Please visit www.reynolds-jonkhoff.com to share your memories and condolences with the family. The family is being cared for by Reynolds Jonkhoff Funeral Home and Cremation Services.

Gordon E Iacovoni, 85, of Traverse City passed away August 23, 2018 at Munson Medical Center with his family by his side. Gordon was born on February 15, 1933 in Grand Rapids to the late Dewey and Edna (Brownell) Iacovoni. At age 9, the family... View Obituary & Service Information

The family of Gordon E Iacovoni created this Life Tributes page to make it easy to share your memories.