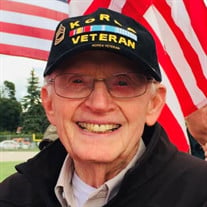 GORDON A. SNOWDEN August 19, 1928 - December 31, 2020 Traverse City, MI In the early hours of the last day of 2020, Gordon Snowden, age 92, went to be with his Lord and Savior Jesus Christ. His life was marked by faith in God, love of family, friends, and our country. Gordon was also known for his exceptional character traits, boundless energy, incredible work ethic, uncompromising integrity, and sacrificial love. Gordon was born on August 19, 1928, in Imlay City, Michigan, to Aaron and Melissa (Holmes) Snowden. He was one of four children (Mildred, Aaron and Betty) who cared deeply for each other, helped one another, and remained close throughout life. Gordon graduated from Lapeer High School in 1946. From 1950-1952 Gordon proudly served his country as a Master Sergeant in the US Army during the Korean War as a Combat Engineer, Company B, 65th Engineer, C Battalion, 25th Infantry Division. The impact of the war created a man of great character and perseverance. For the rest of his life, Gordon never forgot that his fellow soldier and lifelong friend, Fremont Schroth, delayed his discharge to stay behind with him and make sure he got out alive. After serving in the military, Gordon began a career in business. The former newspaper boy was on his way to becoming an entrepreneur, builder, developer, and real estate broker for 50+ years. On August 5, 1961, at Lincoln Park United Methodist Church, Gordon married the woman he had waited for, Norma R. Wynn. Throughout 59 years of marriage, Gordon appreciated her faith and ongoing support, and the many talents she brought to their family, friends and his work. Welcoming three wonderful children David, Jennifer, and Lara, no father enjoyed his role more than Gordon. After building a ‘home on the hill’ in Flushing, Michigan, the family enjoyed living there from ‘kindergarten to college’. Gordon loved being with his family: whether working in the garden, playing with their beloved dog Frosty, or visiting relatives, he wanted to 'be together.' Throughout those years, the family traveled, camping across the United States, seeing the country, and making priceless memories. Gordon was an avid outdoorsman, often seeking the peace of nature when he went fishing and hunting with friends, sometimes in the wilds of Canada. Growing up during the Great Depression deeply influenced Gordon's life, and he was driven to help others have good homes. He found great purpose in building quality homes for families. His strong work ethic prompted him to develop numerous subdivisions in the Lapeer and Flint areas. He loved to hear that the homes he built brought joy to the families living there. Nothing made Gordon happier than his son David joining him in the family business. They worked side by side for many years on countless projects together. In 1991, having vacationed in Traverse City for many years, the family moved here. Surrounded by the beauty of Northern Michigan, Gordon created new homes, new friendships., new memories and a season of greater contentment began. He was a member of Bayview Wesleyan Church where he and Norma became part of a deeply caring faith community. While enjoying this new chapter of his life, Gordon's heart was still connected to the Lapeer area. He remained active in business there where his family and forever friends lived. The annual Holmes - Snowden Family Reunion was of great importance to Gordon. He was excited to see each relative, hear about their lives while celebrating their Irish and Canadian roots. In recent years, Gordon's favorite memories were going on the Honor Flight to Washington, DC with fellow veterans and celebrating his 90th birthday on Mackinac Island. Both experiences gave him joy and a smile a mile wide as he felt loved and honored. Gordon also experienced complex health challenges and he faced each head-on. He was incredibly grateful for the excellent medical staff and caregivers at Munson Medical Center and Orchard Creek. After a heart attack in 2019, he was cared for by his loving family at home. Even though his journey was intense at times, 'Team Snowden' (as a doctor named them) was always there supporting Gordon. His ability to press on was remarkable, and when facing a difficulty, he would say, "We got to do it." Throughout Gordon's life, he experienced many challenges, but his unwavering faith in Jesus sustained him. He carried this prayer in his wallet his entire life, "I believe I am always divinely guided. I believe I will always be led to take the right turn in the road. I believe that God will always make a way where there seems to be no way." Gordon's greatest hope was that his loved ones would know the peace and hope of Jesus Christ so that they would be with him in heaven. The assurance that Gordon is with Jesus changes everything and gives his family great peace. I am the resurrection and the life. Whoever believes in me, though he die, yet shall he live, and everyone who lives and believes in me shall never die. John 11:25 He was preceded in death by his parents and brother Aaron. Surviving him are wife Norma Wynn Snowden, son David Snowden, daughters Jennifer Wynn Stoll (John) and Lara Snowden, sisters Mildred Hinton and Betty Klug, grandchildren Evan Stoll, Jacob Stoll, and Peyton Diehl, step-grandchildren: John Stoll IV (Melissa), Stephen Stoll (Katie), five step-great-grandchildren, sister-in-law Charlene Wynn and many nieces, nephews, and treasured friends. Special gratitude for loving caregivers over the years: Diana, Jill, Linda, Meghan, Rebecca, and Heartland Hospice. A Celebration of Life is planned for the spring, details to follow. You may honor Gordon’s life by sending a donation to Bayview Wesleyan Church, 720 Wayne Street, Traverse City, MI 49684 or by helping someone in need, in his honor. Please feel free to share your thoughts and memories with Gordon’s family at his tribute page at www.reynolds-jonkhoff.com. The family is being served by Reynolds Jonkhoff Funeral Home & Cremation Services.

The family of Gordon A. Snowden created this Life Tributes page to make it easy to share your memories.