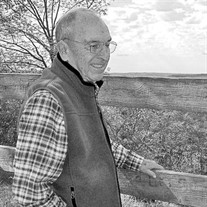 Gordon Lee Wheeler passed away peacefully on January 27, 2020 at the age of 94. He was born on September 10, 1925 to Lester and Gertrude (nee Milbert) Wheeler and grew up in Mayfield, Michigan. Gordon married Helen L. Harty on April 12, 1947 and they celebrated 72 years of marriage last year. Gordon and Helen resided in town before moving to their home on Spider Lake. There they enjoyed many years on the water before downsizing to the Village at Bay Ridge where Helen still resides. As a young man, Gordon worked for the Chesapeake and Ohio Railroad before spending the majority of his career at Cone Drive, retiring in 1986. He enjoyed attending the Cone Drive Gear Quarter Century Club dinners with his grandson Michael. Gordon led an active life; he loved the outdoors and spending time with family and friends. A few of his many interests included ice skating, snowmobiling, and cross-country skiing. He was an avid boater on West Bay and the many inland lakes around the area, especially Spider Lake. As one of the early volunteers with the Inland Seas Education Association he acted as an onboard Schoolship instructor. Gordon loved mushroom picking in his “secret” places around Mayfield and Kingsley as well as hiking around the Brown Bridge area and Mayfield pond. He had a wonderful sense of humor and told many stories of growing up in Mayfield and the adventures afforded by living in that area during those times. Gordon enjoyed taking long drives throughout Northern Michigan, especially the M-22 Loop around Leelanau County. As a lifelong aviation enthusiast, Gordon earned his private pilot’s license in the 1970s and loved taking flights around the region. He was particularly fond of military aircraft and attended every U.S. Navy Blue Angels performance in Traverse City until 2018 when health issues prevented him from attending. Gordon and Helen frequently took vacation trips driving across the country and enjoyed visiting many National Parks. Their travels also included a river cruise through Europe visiting cities along the Danube, Rhine, and Main Rivers with land excursions into Germany and Belgium. Surviving are his wife Helen, daughter Sherry (Michael) Barich of Lincolnshire, IL, and grandchildren Michael (Sheila) Anderson, Eric (Kimberly Crow) Anderson, and Stephanie (Scott) Beckstead of Traverse City, Kristen (Jeff) Moon of Battle Creek, and Nicholas Barich of Laramie, WY. He also leaves eight great-grandchildren, three great-great-grandchildren, sisters-in-law Lucy (Ken) Harty and Phyllis (Russell) Mowen, and many nieces, nephews, and their families. Gordon was preceded in death by his parents, siblings Mildred (Lawrence) Reddy, Dorothy (Chuck) Lewis, Iva (Burt) Baker, Raymond (Mabel) Wheeler, and daughter Cindy (Michael Williams) Wheeler. Gordon was a role model to his daughters and grandchildren. His family feels blessed to have had him in their lives and cherish the lifelong happy memories that comfort them. A celebration of life will be held at a later date. Gordon’s family would like to express their thanks to the Munson Medical Center, Munson Hospice House, and doctors Brian Burke and Roberto Corpus for their wonderful care and compassion. The family is being cared for by Reynolds-Jonkhoff Funeral Home and Cremation Services.

Gordon Lee Wheeler passed away peacefully on January 27, 2020 at the age of 94. He was born on September 10, 1925 to Lester and Gertrude (nee Milbert) Wheeler and grew up in Mayfield, Michigan. Gordon married Helen L. Harty on April 12, 1947... View Obituary & Service Information

The family of Gordon Lee Wheeler created this Life Tributes page to make it easy to share your memories.