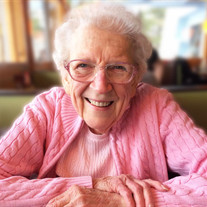 TRAVERSE CITY – Grace Marie Glynn, 88, of Traverse City. Our Amazing Grace passed peacefully at dawn on July 17, 2015. Grace M. (Betzer) Glynn was born in Buffalo, NY, on January 8, 1927, to Grace (Stock) Betzer and Joseph E. Betzer. She graduated from Mount St. Joseph Academy, where she was president of her senior class with a focus in business. She married T. Kevin Glynn on April 23, 1949, and their union endured until his death in 2001. During their lives together, Grace and Kevin were blessed with 13 children. Grace excelled as head of household operations. Grace was proud to have made Traverse City her home for 60 years, during which she remained an active parishioner of Immaculate Conception Church. She enjoyed her friends and their families, sharing meals and stories, conquering jigsaw and crossword puzzles, and the adventures of traveling by train. She rarely went a week without a round of bridge with her lifelong friends. She also was an avid reader with a passion for typing and editing on behalf of local authors and celebrities, and she recently established a community lending library at her home. To Grace, a stranger was only a person she had not yet met. Survivors include her children, Mary (John) Chilvers of Oregon; Claudia Glynn of Maine; Mark (Angie) Glynn of Traverse City; Paul (Edie) Glynn of Traverse City; Martha (Jim) Bowden of Mason, MI; Mary (David Ball) Glynn of Maple City, MI; Matthew (Martha) Glynn of Illinois; John (Shannon) Glynn of Wyoming, MI; Joni (Ty Frederickson) Glynn of Utah; Colette (Mensah) Gaba of Ypsilanti, MI; Anne (David) Schlosser of Washington: and, Christopher Glynn of Traverse City. Her beloved family also includes 22 grandchildren, 21 great-grandchildren, sister Lois Bertram, and many adored in-laws, nieces, nephews and cousins. She was preceded in death by her husband Kevin, an infant daughter, Bernadette; daughter, Karen Glynn Breisch; granddaughters, Kali Breisch and Carly Glynn; and brothers, Jack and Robert Betzer. Her family and friends will remember Grace for her thoughtfulness, sharp memory, wit and humor, magnetic personality, wisdom, and her deep spiritual life. Visitation will be held Sunday July 19, 2015 from 4-7 PM at Reynolds-Jonkhoff Funeral Home. Mass of Christian burial at 11AM will follow visitation from 10AM Monday July 20, 2015 at Immaculate Conception Church. Inurnment will take place at a later date at Oakwood Catholic Diocesan Cemetery. Memorial contributions may be made to Immaculate Conception Food Pantry or The Heat and Warmth Fund (THAW). The family is being cared for by Reynolds-Jonkhoff Funeral Home and Cremation Services.

The family of Grace Marie Glynn created this Life Tributes page to make it easy to share your memories.