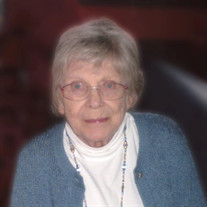 CEDAR – Grace J. (Waclawski) Plesha passed away at home surrounded by family, on October 18, 2014 following an extended illness. Born at home in Hamtramck, MI, Grace spent the first 30 years of her life in Detroit. As a young career woman, she worked as a secretary for companies such as Campbell Ewald and WCAR Radio. In 1961 she married her husband, Steve Plesha, and later moved to Cedar, MI, to raise a family. There she was a homemaker who enjoyed tending her flower and vegetable gardens. In the 70s, she returned to the workforce and was an executive secretary to general managers at WTCM Radio and later for WPBN -TV Channel 7 & 4 in Traverse City. She retired in 1991. In her retirement, Grace spent her time making handmade gifts for her family and friends, including quilts, and her creations have become family treasures. Later, she enjoyed computer games and became an avid NASCAR fan . Grace is survived by her children Suzanne (Timothy Pollard) of Muncie, IN; Stephen of Cedar; Sarah (Erik Brow); and John (Erica) of Frankfort. She has six grandchildren including Heather (Plesha) Mast, Amanda Pollard, William Pollard, Matthew Barry, Kyle and Bryce Plesha. Great grandchildren include Jason and Evan Mast. She is also survived by her brother, Thomas Waclawski (Marge) of Traverse City and many nieces and nephews. Grace was preceded in death by her parents Leonard and Anna Waclawski; sister Terry Thomas (George) of Birmingham, MI; and brother Leonard Waclawski (Diane) of South Boardman. Visitation for friends and family will be held at 10:00 am, Friday, October 24, at Holy Rosary Catholic Church in Cedar/Isadore, MI. Mass of Christian Burial will follow at 11:00 am. Donations in memory of Grace can be made to Holy Rosary Catholic Church, Isadore Michigan. Please visit www.reynolds-jonkhoff.com to share your thoughts and memories with the family. The family is being served by Reynolds Jonkhoff Funeral Home.

CEDAR &#8211; Grace J. (Waclawski) Plesha passed away at home surrounded by family, on October 18, 2014 following an extended illness. Born at home in Hamtramck, MI, Grace spent the first 30 years of her life in Detroit. As a young career... View Obituary & Service Information

The family of Grace J Plesha created this Life Tributes page to make it easy to share your memories.