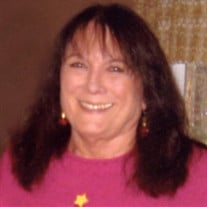 Gwen C. Sanford passed away peacefully, on January 15, 2018. She was born in Grand Rapids, Michigan, on October 26, 1942, to L. Carlton and Ida Mae (Claytor) Sanford. Following graduation from high school Gwen attended college and then began working full time. She joined the Michigan State Police in 1966. She was stationed in Pontiac and later in Traverse City. While a trooper, Gwen's service was characterized by courage, respect for others, and dedication to law enforcement. She was an honored member of the Dive Team, serving as Divemaster for many years. She was involved in several search and recovery operations in Michigan, including a particularly difficult recovery dive in the Straits of Mackinac that nearly cost her life. She worked with other police agencies and was especially proud of the rapport and support of local United States Coast Guard crews. Gwen co-led a team doing ground-breaking work studying methods of water rescue involving cars and school buses and later founded a diving training and consulting company, Professional Underwater Recovery, Inc. Gwen retired in 1992 after 26 years of honorable service with MSP. Gwen, born Glenn, met a Park Ranger, Carol Ann Larson, while patrolling near Sleeping Bear. Not long afterward, they were married on August 9, 1972, in Honor, Michigan. Together they enjoyed the beauty of northern Michigan, sailing, biking, hiking, water skiing and exploring all that the area offers. Throughout her life, Gwen enthusiastically pursued many interests and frequently shared her knowledge with others, including hobby interests in ham radio, photography, Pomeranian rescue, computers and electronics. She was also a Reiki master. Gwen made friends easily, a trait that served her well in law enforcement and also later in life as she interacted with the public. Her self confidence and courage were important as she helped found a transgender support group and gave much personal encouragement to the LGBTQ community. Nearing the end of her multi-faceted career, she worked part-time at Paul Bare, Attorney-at-Law; at Riverside Canoe in Honor, MI; and taught SCUBA diving. Whether in her career or in her leisure pursuits, Gwen went all out, living life to the fullest. While illness and disease prematurely took its toll, Gwen's fondest wish was to be remembered for who she was in the prime of life, a friend to all. Gwen is survived by her wife, Carol Larson, three children; John (Teresa) Hall of Orange, Texas; Katheryn (Lupe) Garcia, of Chicago, Illinois; and Paula M. Sanford of Traverse City. Her grandchildren include Lagos and Amado Garcia of Chicago; and Kimberly and Michael Hall together with several great-grandchildren. She is also survived by sister-in-law Susan (Rich) Higgins, and many nieces and nephews. Gwen was preceded in death by her parents and brother John Sanford, sister Mardell DeFouw; in-laws Betty and Paul Larson, and special brothers-in-law, Bruce Larson and Thomas DeFouw. The family thanks InTeliCare Hospice, in particular Nurse Kevin, and the staff at Traverse Victorian Senior Living for their tenderness and care during Gwen's final months. A memorial service will be held on Sunday, January 28, 2017 at noon at the Reynolds-Jonkhoff Funeral Home, with visitation beginning at 10 a.m. Pastor Jane Lippert will officiate services. Those wishing an expression of sympathy are encouraged to direct contributions to the Cherryland Humane Society, 1750 Ahlberg Road, Traverse City, MI 49686 or Peace Ranch, 2556 Hoosier Valley Road, Traverse City, MI 49685.

The family of Gwen 'Glenn' Carlton Sanford created this Life Tributes page to make it easy to share your memories.