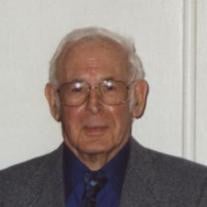 Empire - Henry Eugene Brunet, 90 of Empire passed away after a long illness December 8, 2012 at Munson Medical Center. Hank was born on March 9, 1922 in Sault Ste. Marie to the late Mr. and Mrs. Moise Thomas and Graziella (Corriveau) Brunet. Hank was the youngest of 13 children, all of whom preceded him in death. Hank enlisted in the United States Coast Guard during WWII prior to Pearl Harbor. His career took him to the Manitou Islands where he met 19 year old Geraldine Mary Payment, a school teacher in the spring of 1946. On August 24, 1946 the two were united in marriage. Hank served abroad during WWII at the liberation of the Philipines, the Battle of Midway and at the Solomon Islands. He also served in the South Pacific, and during the Korean War was stationed in Guam. When he was not overseas, he was stationed all around the Great Lakes serving aboard various ships and at numerous bases. Hank retired as Chief Warrant Officer - 4 after 30 years of faithful service. Upon retirement he became a Sargent of Arms at the capital building in Lansing for two years. He then retired with Gerry to Empire where they have made their home. In his early years, Hank enjoyed an active lifestyle playing Hockey and Skiing. He was a former member of the Elks Club and the Empire Lions Club. Hank was a lifetime member of the Disabled American Veterans and the Retired Military Officers Association. He was also a member of St. Philip Neri Catholic Church in Empire. In his spare time he enjoyed golfing, hunting and watching the Detroit Lions and Tigers. Hank is survived by his wife of 66 years, Gerry, his three children, Michael (Marylee) Brunet of Manitowoc, WI, Patrick (Susan) Brunet of Empire, and Melanie Brunet of Michigan City, IN, five grandchildren, eight greatgrand sons, and numerous nieces and nephews. Visitation for friends and family will be held from 6 to 8 pm at St. Philip Neri on Tuesday, December 11, 2012. The Rosary will be prayed at 7:30 pm. Mass of Christian Burial will also take place at the church on Wednesday, December 12, 2012 at 11:00 am. Memorial contributions in memory of Hank may be directed to Empire Heritage Museum or to the Glen Lake Fire Department.

The family of Hank E. Brunet created this Life Tributes page to make it easy to share your memories.

Empire - Henry Eugene Brunet, 90 of Empire passed away after...