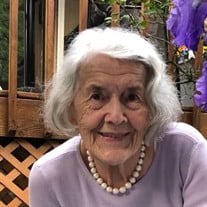 Johanna (Hanna) Milles Patterson of Traverse City, passed away peacefully on November 27th, 2020 at the age of 92. She was born June 9, 1928 in Andernach, Germany to Alvina and Peter Milles who had 7 other children. She joins her late husband, Thomas Patterson, who preceded her in death in 2012. In 1951, Hanna immigrated to the United States on a ship through Ellis Island with her first husband, Raymond Hermann Carrie, and their 6 month old daughter. They lived in Marion, Indiana where Hanna learned English, assimilated to their new life, and had their only son before eventually moving to Cadillac, Michigan where they had two more daughters. They were married for 25 years while they lovingly raised their 4 children and co-owned and operated their business, World Wide Travel Service, in downtown Cadillac. She ran the business for 15 years with the same grace and elegance that she carried throughout her life. The travel agency allowed Hanna to travel the world and return home to Germany to visit relatives every year. Hanna was a talented artist, a fabulous cook, and loved to entertain to the delight of all that shared her table. Generous of heart, she had open arms for anyone that needed her. That is when she shone the brightest. Hanna married Thomas Patterson of Battle Creek in 1975. They shared a love for dogs, good food and family. They moved around Michigan for Tom’s career before settling in Traverse City in 2000. Hanna is survived by her four children: Linda Borish (Arnold) of Berwyn, PA, Raymond E. Carrie (Linda) of Kalamazoo, MI, Mary Ann Carrie of Suttons Bay, MI, and Carrie Carrie Schuett of Watertown, WI; her 10 grandchildren and 15 great grandchildren to whom she was lovingly known as Oma; her 6 stepchildren, 6 step-grandchildren and step-great-grandchildren; as well as her one remaining sibling, Rosemarie Matz of Stuttgart, Germany. Hanna will be deeply missed. Hanna’s life will be celebrated at a later date. In lieu of flowers, contributions can be made to The Father Fred Foundation where Hanna volunteered for many years. Arrangements have been made by Reynolds-Jonkhoff Funeral Home.

Johanna (Hanna) Milles Patterson of Traverse City, passed away peacefully on November 27th, 2020 at the age of 92. She was born June 9, 1928 in Andernach, Germany to Alvina and Peter Milles who had 7 other children. She joins her late husband,... View Obituary & Service Information

The family of Hanna Patterson created this Life Tributes page to make it easy to share your memories.