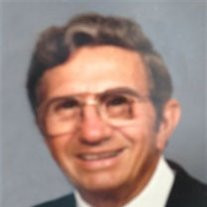 Traverse City-Harold Marcus Burt, 92, a retired Ford Motor Company Executive of Interlochen, died Thursday morning, August 29, 2013, at Munson Medical Center, surrounded by his loving family. Born June 16, 1921, in Detroit, he was the son of the late Chelcius Calvin and Jessie (Whitehouse) Burt. On October 14, 1950 at St. Valentine Catholic Church in Redford, he married the former Virginia Ann Fritz. A proud veteran, Harold served with the 8th Division of the Army Airforce during WWII. He is survived by his wife of 62 years, Virginia A. Burt of Interlochen, children, Christopher (Theresa) Burt of Brighton, Nancy Burt of Brighton, Terrence (Deborah) Burt of Interlochen, Cindy (John) Ostroski of Rochester Hills and Daryle Burt of Interlochen; 10 grandchildren; 2 great grandchildren siblings, Eugene Burt and Charles (Louise) Burt ; along with many nieces and nephews. In addition to his parents, he was also preceded in death by a brother, Howard Burt. A Funeral Mass will be offered at St. Patrick Catholic Church on Saturday, August 31, 2013, at 11: 00 A.M., with visitation one hour prior to the service. Rev. Gregory McCallum will preside. Entombment will follow at Oakwood Catholic Diocesan Cemetery. In remembrance of Harold, memorials may be directed to the Weber Heart Center, c/o of Munson Regional Foundation. Envelopes may be obtained at the church.. Kindly share your memories with the family on their online guest book at www.reynolds-jonkhoff.com. Arrangements were made with the Reynolds-Jonkhoff Funeral Home and Cremation Services.

The family of Harold Marcus Burt created this Life Tributes page to make it easy to share your memories.