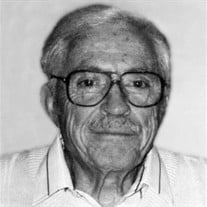 TRAVERSE CITY — Dr. Harold Gordon, 102, of Traverse City, passed away on Sept. 28, 2015. Harold was born to Harry D. Gordon and Edna (Kinsella) Gordon on Aug. 12, 1913 in Louisville, Kentucky. He had one older brother, Leon Louis. After moving from state to state with his family during the Great Depression, Harold attended a private Catholic boarding school in Windsor, Ontario, where he was valedictorian of his graduating class. Following his high school graduation, Harold pursued his medical degree at the University of Michigan. It was in Ann Arbor where he met the love of his life, Irmtraud (Trudi) Weyrich. They were married on Oct. 5, 1936. Harold enjoyed serving as team doctor for the Detroit Tigers as his completed his residency. During World War II, Harold served as an Army surgeon during the building of Harmon Air Base in Stephenville, Newfoundland. Following his tour of duty in Newfoundland he was assigned to the Yukon Territory as the Army doctor for the Corps of Engineer’s building the Alaska Highway. His final assignment was at Fort Carson in Colorado Springs, where he worked as a surgeon and triage doctor for the soldiers who were wounded in the Battle of the Bulge. He completed his work in the Army as a Lieutenant Colonel. Following World War II Harold became a physician for the Dow Chemical Company in Midland and served as corporate medical director for Dow International. Harold was an avid athlete and played soccer, ice hockey and football. He was also an enthusiastic skier, swimmer and scuba diver. Other hobbies included photography, world travel and carpentry. He built a log home on Wixom Lake in Gladwin County where the family spent each summer. He volunteered to vaccinate children in developing countries, including Kuala Lumpur and the Dominican Republic. He was a Paul Harris Fellow in Rotary International and served on Governor George Romney’s Commission on the Employment of the Handicapped. Harold was awarded fellowships in the Michigan State Medical Society in Postgraduate Education and Occupational Medicine, the Association of Industrial Medicine and the American College of Preventative Medicine. Dr. Gordon is survived by his wife, Trudi; his three children, Dr. Nancy (Jerry) Pokorny, Colorado Springs, Colorado, Dr. Suzanne Perry, Castle Rock, Colorado and Michael (Kim) Gordon, of Traverse City. His grandchildren include Jennifer Cronkhite, East Lansing, Gena Perry, Parker, Colorado, Michaela (Elliot) Tracy, Parker, Colorado, Brianna (Jesse) Esquibel, Centennial, Colorado, Josiah Perry, Castle Rock, Colorado, Nicole (Paul) Pridgeon, Reading, Eric (Rachelle) Gordon, Royal Oak and six great-grandchildren. Special thanks to the wonderful women of Monarch Home Health Services for their skill and caring. A memorial celebration of Harold’s life will be scheduled at a later date. Memorial donations may be sent to the Susan G. Komen Foundation or Northwest Michigan Community Action Agency Meals on Wheels. Kindly share your thoughts and memories with Gordon’s family by way of his online guestbook at www.reynolds-jonkhoff.com. Surely goodness and mercy shall follow me All the days of my life, And I will dwell in the house of the Lord Forever Psalms 23:6 Humanitarian – Healer – Husband – Father The family is being cared for by the Reynolds-Jonkhoff Funeral Home.

The family of Dr. Harold Leo Gordon created this Life Tributes page to make it easy to share your memories.