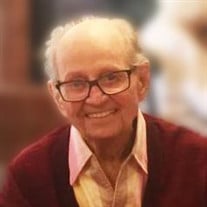 TRAVERSE CITY – Harold Vincent, age 95, of Traverse City, passed away Saturday, October 1, 2016 at the Boardman Lake Glens in the loving care of his nephew, Michael. Harold was born February 8, 1921, in Painesdale, MI, to Philip Vincent and Minnie (Barnecut) Vincent. Harold graduated from Painesdale High School and attended class reunions up until the age of 90. Following graduation, Harold attended Michigan Technological University where he received his Bachelors of Science degree in Mechanical Engineering. After graduating from Michigan Tech he enlisted in the United States Army, where he was deployed in the Pacific theater during WWII. Upon being discharged from the Army, Harold worked in diesel electric for General Motors Corp. He also worked as an engineer for Chrysler Corp. He earned a master’s degree in education and taught physics at Henry Ford Community College in Dearborn Michigan for fifteen years. His wife, Evelyne also taught kindergarten in Dearborn for thirty-one years. In 1977 both retired and moved to Traverse City. Harold had originally met his wife, Evelyne (Erdman) Graubman, of 49 years when he was in High School and Evelyne had her first job teaching kindergarten across the street from Painesdale High School. Twenty years later they reconnected in what would be a second marriage for both of them. Together, Harold and Evelyn loved to travel in their mobile home all across the Western United States and Canada. Harold had many interests, one being building and operating HAM radios. He also had a pilot’s license and loved to fly single engine planes and gliders. Harold is survived by his daughters from a previous marriage; Candace (Mark) Whitmer, and Pamela (Ray) Klimas, grandsons; Conor Whitmer, and Brian Klimas, niece; Sharon Dreese, and nephew; Dr. Michael Erdman. Harold is preceded in death by his parents, wife, and his brothers. Honoring Harold’s wishes, no public services will be held. The family is being served by the Reynolds-Jonkhoff Funeral Home and Cremation Services. Please visit the Reynolds-Jonkhoff website www.reynolds-jonkhoff.com to share your thoughts and memories with the family.

The family of Harold Vincent created this Life Tributes page to make it easy to share your memories.