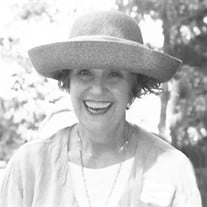 Harriet Kritselis Rennie, a gifted oil painter, prolific party-giver, world traveler, founder of Traverse City’s Archangel Gabriel Greek Orthodox Church, and the first Dean of Women at Interlochen Arts Academy, peacefully left this world with family by her side, on the morning of August 24, 2017. An adventurous soul and woman of great style, beauty and sophistication, Harriet Rennie saw joy and life everywhere she looked. Forever positive and optimistic, if there was an adventure to be had, or a wedding to go to, Harriet was always ready-if not always on time. Harriet Kritselis was born on Greek Independence Day, otherwise known as March 25. Christened Xarikleia (in Greek), she arrived as the devoted younger sister to William (Bill, or Vassily), whom she adored her whole life. Harriet was born above her Greek family’s restaurant, one-time bar and candy shop, the Alpha of Sweets, on Portage Avenue in Sault Ste. Marie. While she never flaunted her age, the truth can now be told-the year was 1933. Harriet was the daughter of Nicholas Kritselis-a hard-working Greek immigrant who arrived in the Soo as a young boy, coming from the tiny village of Schini, 20 miles from the ancient birthplace of the Olympics, in the Peloponnese, Greece-and his wife Theodora, a beautiful young woman he met from the nearby village of Zaxaro when he returned for a visit to Greece in the late 1920s. Growing up over her parents’ restaurant was an introduction to the world for Harriet: the Alpha was a friendly gathering place where local Greeks, American flyers, Native Americans, sailors, travelers and immigrants from all over the world felt at home. The stories she heard there fired her imagination and carried young Harriet through her childhood. She graduated from Sault Ste. Marie High School in 1950, and went on to study education at Central Michigan University (Class of 1954), and earn her Masters degree from University of Michigan in 1963, in guidance and counseling. Harriet began her career in education teaching high school in Miami, Florida. She later returned to the Soo, where she taught at Sault Public Schools and worked at Kincheloe Air Force Base, in the commandant’s office. In 1963, Harriet moved to the Traverse City area when she was appointed Dean of Women at Interlochen Arts Academy. There she took on many roles, from holding hands to shoveling snow. In her words, she wore many hats-a tradition she literally and stylishly continued for the rest of her life, to all her friends’ delight. Everyone Harriet met in Traverse City tried to introduce her to the most eligible bachelor they knew, John Rennie. No matter how hard they tried, though, the right time somehow never came along for the busy young professional woman. Harriet then moved to Evanston, Illinois to continue her career in guidance and counseling at New Trier High School, and it seemed as though she would never meet the mystery man from Traverse City. But on a weekend in January 1965, some girlfriends secretly arranged a blind date for Harriet and John, who happened to be in Chicago for a convention. As the story goes, the pair went for a drink in the lobby of the Drake Hotel-and talked until morning. Entranced, John flew home the next day and announced to his mother that he had found “the One.” Harriet and John were married on July 18, 1965 in Sault Ste. Marie. Their courtship was one for the ages, and their romance and love for one other endured throughout the 33 wonderful years they shared together. Harriet and John moved to Monroe Street, where she raised their children Chris, Charles and Laura, in a lovely neighborhood one block from the bay, surrounded by families who soon became wonderful friends, and where Harriet entertained like no one else, with the tireless help of her dear friend Elinor Harrigan. Indeed, nothing could make Harriet happier than when she was “cooking enough for the Greek Army,” in the words of her husband. A woman of unshakable faith and indomitable spirit, Harriet took on all her pursuits with the same love of life and enthusiasm. Harriet never held back, and there was never any reservation in her heart. “Build an Orthodox Church here in Traverse City? Of course, we can do it!” And no matter the occasion, Harriet rose to it. Even when faced with the worst heartbreak a parent could endure-the death of her daughter Laura, nearly age 13, Harriet carried her family forward with grace, undaunted. As always, Harriet simply radiated love, making her an adored yiayia to her grandchildren, and a dear, dear friend to so many. She is survived by her late brother Bill’s wife, Elaine and son Niko of East Lansing; her sons Christopher Rennie of Minneapolis, MN and Charles (Shannon) Rennie of Traverse City; and her grandchildren Owen, Evan and Arianna of Traverse City and Alexander and Isabelle of Minneapolis, MN. A funeral service will be held Saturday, Sept. 9th at 11:00am at the First Congregational Church, with a viewing at 10:00am. The family will receive friends on Friday, Sept. 8th from 5:00 to 7:00pm at Archangel Gabriel Greek Orthodox Church, 1030 Hastings Street, Traverse City, with the Trisagion prayer service at 6.00pm. In lieu of flowers, memorial contributions may be directed to the Archangel Gabriel Greek Orthodox Church Building Fund, P.O. Box 6350, Traverse City, MI 49696, or by donating online at www.tcorthodoxchurch.com, or to the Laura Ann Rennie Memorial Endowment, Grand Traverse Regional Community Foundation, 250 East Front Street, Suite 310, Traverse City, MI 49684. You are invited to sign Harriet’s online guestbook at www.reynolds-jonkhoff.com Chris and Charles would like to thank Just Like Family Caregivers, and especially Barb Allison-also a native of Sault Sainte Marie, she and Harriet formed a deep and loving friendship and shared hours of laughter and good times-for taking such good care of Harriet.

The family of Harriet Rennie created this Life Tributes page to make it easy to share your memories.