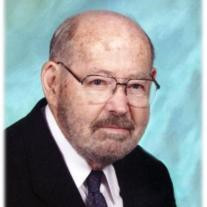 TRAVERSE CITY - Harry R. Ball, PE.FNSPE, 97, of Traverse City, died December 11, 2012 at Munson Medical Center. He was born October 29, 1915, the son of Harry Allen and Linnie Gertrude Ball. The family lived in Columbia, MO where he graduated from Hickman High School and received his BS degree in Engineering from the University of Missouri in 1940. While attending the University, he met the love of his life, Helen Anna Trippe, with whom he shared 62 wonderful years filled with love, laughter and joy. They were married on March 28, 1942 while a Naval officer stationed at Pensacola, FL. Surviving are two sons, John Allen (Gloria) Ball of Georgetown, TX and Dr. Richard David (Paula) Ball of Traverse City; one daughter, Dr. Nancy Ann Ball of Cape Elizabeth, Maine; one sister, Dorothy Ann Siudzinski of Bartow, FL, eleven grandchildren, seven great grandchildren and one great-great grandchild. Harry and Helen moved to Traverse City in February 1994 and quickly became involved in both community and church affairs. He was the organizing chairman and served eight years on the Peninsula Township Purchase Development Rights Committee; served as a mentor for the transition class at Central High School; and was a supporter of Boy Scout Troop 23 with his great grandson. He was active in his Professional Engineering Society Local Chapter where he served as State Chapter Director. He was active in the First Congregational Church where he has served as chairman of the Trustees, chairman of the building committee, chairman of the aesthetics committee and had served four years as president of the church council. After retiring for the second time, Harry dedicated his fifth career to God and his church. Harry dedicated his life to family, his church and his profession of engineering. His working life covered four careers: International Harvester Company, Evansville, IN; the U. S. Navy (Lt. Comdr.) during World War II; Whirlpool Corporation in Marion, OH and St. Joseph, MI and the Michigan Society of Professional Engineers in Indiana and Ohio. He held numerous positions with the national, state and local organizations including founding chairman of the MSPE Scholarship Trust; MSPE State President (1964-65) National Director (1965-67 and 1989-1995). He was elected a Fellow Member by NSPE and MSPE in 1992. He was MSPE's first Fellow Member. He was a member of Tau Beta Pi National Honorary Engineering Society. Harry will be remembered for his devotion to students and his untiring efforts to establish an Engineering Scholarship Program for aspiring engineering students. In 1989, MSPE established an ongoing engineering scholarship in his name for a freshman engineering student attending one of Michigan's accredited engineering schools. He will be remembered by his family and grandchildren for his ongoing support and encouragement, broad and insatiable curiosity and eagerness to learn, his deep love, and sense of humor. His children felt his ongoing pride and love always, and never ceased to profit from his intellect and wisdom (whether solicited or not). Visitation will take place from 5 until 7 p.m. Friday, December 14 at the Reynolds-Jonkhoff Funeral Home. The Funeral Service for Harry will begin at 11 a.m. Saturday, December 15 at First Congregational Church, 6105 Center Road, Traverse City. Following services, Harry's remains will be donated for anatomical study. Memorial contributions may be directed to The First Congregational Church Memorial Aesthetics Committee. Please share your favorite memory of Harry with his family by way of his online guest book at www.reynolds-jonkhoff.com. The family is being served by Reynolds-Jonkhoff Funeral Home and Cremation Services.

The family of Harry R. Ball created this Life Tributes page to make it easy to share your memories.