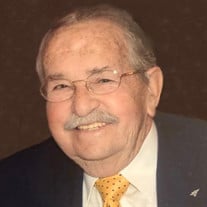 Harry “John” Levi Cribbs born September 5, 1923 in Grand Rapids, MI, passed away December 29, 2019 in Roseau, Dominica doing what he loved- “Christmas cruising” the Caribbean with his family. John was fortunate to live a full & very rewarding life up until he passed away peacefully at age 96. John was a resident of Long Lake in Traverse City, MI for over 40 years, where he happily lived in homes he built from the foundation up. In 1942, John moved from Detroit, MI where he was contributing to the war building B24 Bombers to Kaleva, Michigan- an area perfect for his hunting & fishing interests. In Kaleva, John purchased a struggling phone company now known as Kaleva Telephone Co. With hopes of providing optimal services to the community, Harry worked hard to expand service offerings to new areas and provide communities with the industry’s top technological advancements. This tireless commitment to the community led to the company’s great successes over the years. John’s passion for community service led him to serve on the village council in Kaleva & become instrumental in purchasing the property that is now the Kaleva public park. In their generous nature, John & his wife, Charmon, gifted the Kaleva community with The Kaleva Library. John was also an active member of the Shriners, where he contributed to their mission of providing healthcare to children with neuromusculoskeletal conditions, burn injuries and other special healthcare needs. John was preceded in death by his wife Charmon Marie Cribbs. He is survived by his children Candace & Fritz Meili in Lexington, KY, Carla & Bob Spalten in Seguin, TX & Jon Cribbs in Traverse City, MI; grandchildren Christopher Smith, Corbin Smith, Trece Spalten, Tina Spalten, Abby Cribbs, Levi Cribbs, Owen Cribbs, and great-grandchild Mason Smith; and his dear friends Sharon Holz, Nancy Elliott, those of the Long Lake, Kaleva, Manistee, Copemish communities and others who his life touched. In lieu of flowers, please consider making a donation in memory of John, to the Saladin Shrine Temple at 233 Fulton Street East Suite 102 Grand Rapids, MI 49503. Harry’s family will announce a celebration of life at a later date. Harry and his family are being cared for by Reynolds-Jonkhoff Funeral home and Cremation Services. www.reynolds-jonkhoff.com

The family of Harry L. Cribbs created this Life Tributes page to make it easy to share your memories.