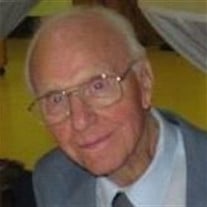 Traverse City – Harry F. Fuller, age 94, of Traverse City, passed away Sunday, December 24, 2017 at Grand Traverse Pavilions in the loving care of his family. Harry was born to Harry and Gertrude (Bramer) Fuller on August 22, 1923 in Traverse City, MI. Harry was raised in Traverse City where he graduated from Central High School. On Pearl Harbor Day, 1941, Harry enlisted in the United States Navy. He served in the South Pacific as a signal man during WWII and was honorably discharged in 1945. On September 23, 1960 Harry married Winona M. Cooper in Traverse City, MI. Harry lived all his life in Traverse City. He loved his wife, his family and this town. He was a lifelong fan and supporter of the Cherry Festival. When Harry was 16, he started working at Defer’s Mens’ Clothing store in downtown Traverse City. After WWII he returned to that job until the store closed. He then went across Front Street to Hamilton’s Men’s Clothing where he worked until he retired in 1986. Harry and Winona then spent the cold winter months in N.Fort Myers, Florida for many years, always returning to Traverse City for the summer. Harry was a member of Central United Methodist Church and a long-time usher there. He was also an original member of the Kiwanis Club of Traverse City and a former secretary. He had perfect attendance. Throughout his life he enjoyed hunting, fishing, camping and traveling. He was an expert at billiards and won many tournaments. Harry is survived by his wife, Winona, and his children: John R. McMillin, Traverse City; Michael (Jaynee) A. Fuller, Blairsville, GA; Patty McMillin, Traverse City and David Fuller, Interlochen. Harry is also survived by 10 grandchildren, 13 great-grandchildren and 1 great-great grandchild. He was pre-deceased by one grandchild. He was also very close to his nephew and nieces. Harry was well-known, well-liked and well-respected. He was a sterling example of a rare and wonderful gift: a truly good man. He will be remembered for his smile and his “world’s best bear-hugs.” A visitation for Harry will take place from 5:00 – 8:00 pm on Friday, January 5, 2018 at the Reynolds-Jonkhoff Funeral Home. A funeral service will take place at 1:00 pm on Saturday, January 6, 2018 at Central United Methodist Church with a visitation for one hour prior. Pastor Chris Lane will officiate.

The family of Harry Frederick Fuller created this Life Tributes page to make it easy to share your memories.