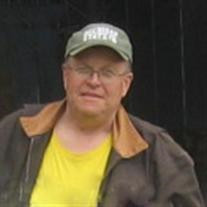 Harry James Round, 63, of Traverse City passed away unexpectedly Friday January 4, 2013 and stepped into the presence of his Lord and Savior. Harry was born on Monday, August 08, 1949 to Franklyn "Bud" and Dorothy (Oatley) Round in Traverse City. Following his graduation from high school, he continued his education at Northern Michigan, then becoming an electrician and later teaching at NMC. A veteran, having served with the U. S. Army, Harry was very patriotic and was always appreciative of other veterans who served our country. On Saturday, February 19, 1983, in Traverse City, Harry took Eleanor Mae McCumby as his bride. They were blessed with a daughter, Alexandrea on April 7, 1984. Harry followed in the foot steps of his father, “Bud” Round, as an electrical contractor. He owned and operated Grand Traverse Electric in Traverse City for 20 years. In 1995 Harry surrendered his life to Jesus Christ and became an active part in the Christian community in the Grand Traverse region. Harry was a kind and loving man whose heart seemed most at peace when serving his family and friends. He was a father to the fatherless and loved to encourage young men and women. This became his main role for the last 12 years while serving as president and founder at Abba’s House (NWM House of Hope) in Traverse City along side his wife Ellie. He loved the Lord and his family more than anything and spent a lot of time with his grandson Joseph and granddaughter Miah. His favorite activity was praying while farming on his John Deere. He also loved trains, building models and fixing anything that was broken. Harry is survived by his wife Ellie; his daughter and son-in law, Alexandrea and Morgan Mitchell of Traverse City; his grandchildren, Miah Grace and Joseph Franklyn Mitchell; his mother Dorothy J. Round of Traverse City and his sister, Sue Ann Round of Suttons Bay. A niece, Mari L. Cangelose of Suttons Bay also survives. Harry's father Franklyn "Bud" Round preceded him in death on January 1, 2007. Harry was a loving son, husband, father, grandfather, and brother. We rejoice as Harry is rejoicing with His Father in Heaven. Visitation for Harry will take place Tuesday, Jan. 8, from 6-8 pm at Church of the Living God, 1514 Birmley Road, Traverse City. A time of celebrating his life will take place on Wednesday, Jan. 9 at 1pm also at the church. Burial will be in Grand Traverse Memorial Gardens. The family requests instead of flowers, that Harry be remembered through a monetary gift to Abba's House - The Father's Heart Fund, P. O. Box 5014, Traverse City, MI 49696-5014. Please share your memories, stories and photos of Harry by way of his online guest book/tribute page at www.reynolds-jonkhoff.com . The family is being served by Reynolds-Jonkhoff Funeral Home and Cremation Services.

Harry James Round, 63, of Traverse City passed away unexpectedly Friday January 4, 2013 and stepped into the presence of his Lord and Savior. Harry was born on Monday, August 08, 1949 to Franklyn "Bud" and Dorothy (Oatley) Round in Traverse... View Obituary & Service Information

The family of Harry James Round created this Life Tributes page to make it easy to share your memories.

Harry James Round, 63, of Traverse City passed away unexpectedly...