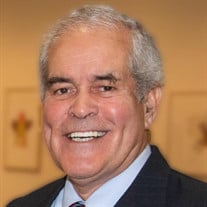 Our beloved Harry Joseph Veeder has left us. He died Sunday, Dec. 12, 2021, due to complications of pancreatic cancer. He was born on November 16, 1937, only minutes ahead of his twin brother Larry to Harry and Elsie “Blossom” Veeder in New Orleans. Harry also had an older brother, John and a younger sister, Jeannie, who was born nine years later. When they were young, their stepfather, Winfred Banks moved the family to Detroit. One morning, little Harry woke up and was terrified to find the entire world had turned white -- he had never seen snow before! Possessing a terrific mind, Harry received his B.A. in History from Wayne State University and his M.A. in American Culture from University of Michigan. As a young man he worked in arts and history administration in Detroit and supported a glittering range of poets, writers, dancers, and musicians. He was briefly married to Gerry Kliendinst, and welcomed their daughter, Elizabeth “Nellie”, in 1961. In 1965 he met the love of his life, Jeanette Minervini, while they were both teaching at East Detroit High School (now East Pointe). They married in 1966 and were blessed with a daughter, Jennifer, in 1968, and their twin sons, Joseph and Winfred, in 1973. In 1972 Harry happily brought his young family to Kingsley where Jeanette’s brother, Ray Minervini built their first home. Harry accepted a position as Business Director at the Child Guidance Clinic. He would eventually serve as the Chief Financial Officer of the State Hospital until its closure in 1989. If Harry ever met you, even only once, he would remember you and all of the details of your encounter. His astonishing memory made him a formidable participant at any trivia contest. However, he was less interested in games, and more interested in community and world affairs. He was a founding member of the International Affairs Forum and never missed a meeting! Harry was also proud to support the Grand Traverse Area Community Living Centers. Many people only knew Harry as the man who took a daily brisk three-mile walk around Munson Hospital and the Commons. He enjoyed watching as his brother-in-law Ray Minervini revived the campus into a vibrant community. His walks also gave him the time to smile and greet the entire world – people, birds, groundhogs, and fish. He could identify any bird by its song and would whistle back to them. Harry was preceded in death by his parents: Harry Veeder, Winfred Banks, and Elsie Banks, and his siblings John (Pam) Veeder, Larry Veeder, and Jeannie Banks Jackson and nephews Shawn Veeder, Tom Veeder and Ricardo Veeder. His memory is cherished by his wife Jeanette Veeder and children Elizabeth “Nellie” (Monty) Newton, Jennifer Gaston, Joseph Veeder and partner Brian Carey, and Winfred Veeder and brother and sister-in-law Ray and Marsha Minervini and sister-in-law Mini Minervini. His great smile and deep dimples will be fondly remembered by his grandchildren Henry Newton, Elizabeth Rose Newton, Isabella Gaston, and William Gaston and numerous nephews and nieces. To honor Harry’s life, the family encourages you to take a walk outside and enjoy the beauty of this area. Then do your best for your community: drive slowly, speak deliberately, and love your family. A memorial service will take place on Tuesday, Dec. 28, 2021 at 3:00 p.m. with the visitation beginning at 2:00 p.m. at Reynolds Jonkhoff Funeral Home, 305 Sixth St., Traverse City. Michigan 49684. Please feel free to share your thoughts and memories with Harry’s family at his tribute page at www.reynolds-jonkhoff.com. The family is being cared for by the Reynolds-Jonkhoff Funeral Home and Cremation Services.

Our beloved Harry Joseph Veeder has left us. He died Sunday, Dec. 12, 2021, due to complications of pancreatic cancer. He was born on November 16, 1937, only minutes ahead of his twin brother Larry to Harry and Elsie &#8220;Blossom&#8221; Veeder... View Obituary & Service Information

The family of Harry Joseph Veeder created this Life Tributes page to make it easy to share your memories.

Our beloved Harry Joseph Veeder has left us. He died Sunday,...