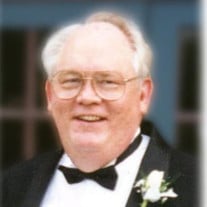 Harvey P. Schroeder peacefully passed away at home Thursday, August 8, 2019 surrounded by loving family; he was 81. Harvey was born to Paul and Alice (Tomke) Schroeder on September 28, 1937 in Bay City, MI. The youngest of five children, and affectionately known as “baby brother” to Viola, Wilma, Helen, and Grace. He attended Michigan Lutheran Seminary High School and then joined the United States Air Force in 1957. After his service, Harvey attended Michigan State University where he met the love of his life Bonnie Bentley through their mutual involvement in the Young Republicans. They were married in 1963 at the First United Methodist Church of Eaton Rapids. They celebrated over 55 years of marriage and the birth of their children Kim and Greg. Harvey worked for 27 years as a business manager with the Berkley School District combining his love of education and numbers. He and his wife Bonnie moved to Traverse City in 2005 to be closer to family. Harvey was a voracious reader, amassing a profound private book collection. His reading interests included theology, the American Civil War, politics, and current events. Further, Harvey was involved as a lay leader with his church and the Michigan History Program. Harvey will be remembered as a humble and sensitive man whose generosity is immeasurable. Education was essential to Harvey and he was committed to being a life long learner, something he passed along to his children and grandchildren. Although soft spoken, his words left a deep impression upon others. Above all, he was a devout Christian, a man of wisdom, and a devoted family man. Harvey is forever loved by his wife Bonnie, children Kim (Larry) Weissling and Greg (Angie) Schroeder, grandchildren Chris Weissling, Nicholas Weissling, Adam Schroeder, and Benjamin Schroeder, and sister Helen Schoenheit of Bay City, MI. He was preceded in death by his parents, sisters Viola, Wilma, and Grace. On Tuesday, August 13th, 2019 funeral services will be held at the Central United Methodist Church, Traverse City beginning at 2:00 PM, visitation will be one hour prior. Pastor Dale Ostema will officiate. A luncheon is to follow at the church. Those wishing to honor and continue Harvey's generous spirit may direct memorials to the Central United Methodist Church College Student Scholarship Fund, 222 Cass St., Traverse City, MI 49684, TCAPS Music Boosters, 412 Webster St., Traverse City, MI 49686, Doctors Without Borders, P.O. Box 5030, Hagerstown, MD 21741, or Safe Harbor of Grand Traverse, P.O. Box 403, Traverse City, MI 49685. Harvey and his family are in the care of the Reynolds-Jonkhoff Funeral Home and Cremation Services.

Harvey P. Schroeder peacefully passed away at home Thursday, August 8, 2019 surrounded by loving family; he was 81. Harvey was born to Paul and Alice (Tomke) Schroeder on September 28, 1937 in Bay City, MI. The youngest of five children, and... View Obituary & Service Information

The family of Harvey Paul Schroeder created this Life Tributes page to make it easy to share your memories.