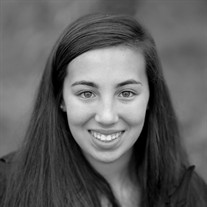 Heather Marie Barley, of Buckley, passed away at the age of 17 due to natural causes while working on a local farm; doing what she loved to do. Heather was born May 28, 1998 in Little Rock, Arkansas to Mark Barley and LaNay (Cavazos) Barley. When she was one-year old, she spent a year in San Antonio, Texas with her grandparents while her Mom and Dad who were serving in the United States Air Force, were deployed to Korea. Her parent’s military careers moved them to North Dakota where she lived for 8 years and finally moved to Buckley in 2010. She was a senior at Buckley Community Schools where she played basketball and volleyball. She also attended the Traverse Bay Area Career Tech Center studying Agricultural Sciences and was enrolled in online college courses at Northwestern Michigan College. It is said that ‘it is not the years in your life that count; it’s the life in your years’. Heather’s life was tragically cut short, but that could have been her motto. She will be fondly remembered as a girl who was known to have a mean streak, a firecracker, a person who could hold a grudge, but in the next moment wrap her arms around you and genuinely say “I love you” as you were consumed in her bear hug. She was a ray of sunshine with a contagious smile and immediately brightened any room that she entered. Heather was a devoted member of the Future Farmers of America (FFA) and the Dusty Trails 4-H Club. She was a team rep and a mentor to younger members of Dusty Trails. She believed that being a member of 4-H was not a week-long stay at the Northwestern Michigan Fair in August, but rather a year long commitment to the animals you were raising. She was passionate about the fair and was thankful for the opportunities it had provided her. Heather volunteered at the Redeemer Lutheran Church food pantry with her grandparents and also volunteered her time at the local United States Department of Agriculture (USDA). She worked at Bud’s in Interlochen during the summer and was able to showcase her love of baking through her job. She was taught the love of baking from her grandmother and was an extremely gifted baker. She also worked for Matt Breithaupt on his farm. The family is grateful for Matt’s generosity and huge heart. Heather is survived by her parents Mark Barley of Traverse City and LaNay Barley of Tipp City, Ohio; sisters Emily Barley and Eryn Barley of Tipp City, Devon Salinas of San Antonio, Texas; grandparents Elaine and Robert Barley of Thompsonville, Lupe and Edward Cavazos of San Antonio; aunts Melissa Barley of Interlochen, Melinda (Bob) Smith of Grand Rapids; uncles Michael (Chris) Barley of Mesick, Edgar Cavazos of San Antonio, and she will be missed by her long-time boyfriend Sawyer Robinson of Traverse City. A visitation will be held Tuesday, December 22, 2015 at the Buckley High School gymnasium from 4 p.m. to 7 p.m. A funeral will be held to honor Heather’s life on Wednesday, December 23, 2015 at 11 a.m. at the Buckley High School Gymnasium, with visitation beginning at 10 a.m. Pastor Mark Berlin of Redeemer Lutheran Church will officiate the service. Memorial contributions can be made to the Heather Barley Perpetual Scholarship Fund that will be established through the Northwest Michigan 4-H Livestock Council, P.O. Box 134, Grawn, MI 49637.

Heather Marie Barley, of Buckley, passed away at the age of 17 due to natural causes while working on a local farm; doing what she loved to do. Heather was born May 28, 1998 in Little Rock, Arkansas to Mark Barley and LaNay (Cavazos) Barley.... View Obituary & Service Information

The family of Heather Marie Barley created this Life Tributes page to make it easy to share your memories.

Heather Marie Barley, of Buckley, passed away at the age of 17...