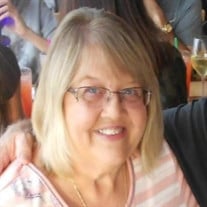 Helen Joy (Crabtree) Cussins, 71 of Traverse City passed away on Monday, March 23, 2020 with her husband David and Two Niece’s Ann and husband Harry White and Charlotta Valentine, and lifelong friend Gail Bader were at her side. Helen was born at the Traverse City Osteopathic Hospital on December 19, 1948 to the late Harold T. and Dorothy (Haines) Crabtree. Although she was born in Traverse City, she spent most of her growing up years in Elk Rapids and Kewadin, eventually moved to Traverse City in 1977. Helen graduated from Elk Rapids High School and attended Northwestern Michigan College. She started out Typing Book manuscripts for, writers Glenn Ruggles and Doug Stanton , and worked for 23 years at Grand Traverse County Sheriff’s Office, as a Clerk/Matron and was able to take an early retirement as Administrative Assistant to Sheriff Harold Barr, in 2000. Helen was held in high regard for her humor, abilities/skills and the way she completed duties in the office, by her fellow Employees of the GTC Sheriff’s Department. Helen and David Cussins married, December 8, 2001 in Sebastopol, CA. Helen and David enjoyed traveling all over the United States and Canada in their many RV’s. They loved Ship Cruises-Alaska 8 times and the Baltic’s on the maiden voyage of the Viking Star out of Bergen, Norway. Helen liked to pass her time with reading, photography, and gardening. She was also a member of the Black Hatters Club of Traverse City, A group with Her fellow High School Alumni, Retired Sheriff Department Employees and several other organizations in and out of the Grand Traverse County area . Surviving Helen is her husband David Cussins, her nieces Ann White and Charlotta Valentine, nephew Robert Oman, great nieces and nephews, and many cousins. Helen is preceded in death by her Parents, Harold and Dorothy (Haines) Crabtree, and sister Laura Oman, Stepfather Max Yankee with Stepsisters and Brothers. A Celebration of Helen’s Life, service will take place at an announced time in late May or June!

Helen Joy (Crabtree) Cussins, 71 of Traverse City passed away on Monday, March 23, 2020 with her husband David and Two Niece&#8217;s Ann and husband Harry White and Charlotta Valentine, and lifelong friend Gail Bader were at her side. Helen... View Obituary & Service Information

The family of Helen Joy (Crabtree) Cussins created this Life Tributes page to make it easy to share your memories.