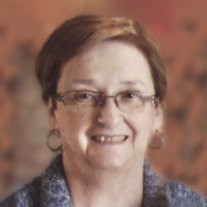 Traverse City-Henrica A. "Rickie" Bradford, 66, of Traverse City, died unexpectantly Thursday, April 25, 2013, at her home. Born on Christmas Day, December 15, 1946, in Traverse City , she was the daughter of the late John William Bradford, Jr. and Marian Lucille (Smith) Bradford. Rickie formerly lived in Grand Rapids, where she taught Special Education. After her return to her native community, she served as a substitute teacher in her chosen profession. As her hobbies, she enjoyed reading, sewing, collecting antiques. She will be remembered as an active environmentalist and was awarded the "Environmentalist of the Year." award. She will be truly missed for her loving and caring ways. Left to cherish her memory are her two sons, Cameron J. Selkirk and Jason B. (Cheryl) Selkirk and their daughter, Aleya, all of Grand Rapids; dear friends, Ron and Darlene Smith, John and Jan Marnett, Lee and Georgia Marnett and Kendra Auxier. In addition to her parents, she was also preceded in death by her brother, John William "Jack" Bradford, III. Memorial Services will be held at the Reynolds-Jonkhoff Funeral Home on Tuesday, April 30, 2013, at 11:00 A.M., with vistation one hour prior to the service. Rev Bonnie Smith will officiating. Cremation has take place. In remembrance of Rickie, memorials may be directed to the Yuba Historic Society. Kindly share your memories with the family on their online guestbook at www.reynolds-jonkhoff.com Arrangements were made with the Reynolds-Jonkhoff Funeral Home and Cremation Services.

The family of Henrica A. "Rickie" Bradford created this Life Tributes page to make it easy to share your memories.