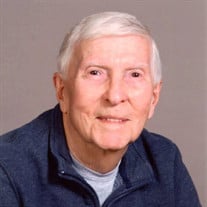 Henry “Bud” William Tiberg, 91, passed away at home with his family by his side on August 10, 2021. Henry was born on July 31, 1930 in Calumet, Michigan. He was the son of John Henry and Daisy Elizabeth (Bayles) Tiberg. Henry grew up in Calumet and graduated from Calumet High School and attended Northwestern Michigan College in Traverse City. After high school he enlisted in the U.S. Navy and was honorably discharged in 1949. He moved to Traverse City to work for Cone Drive Gear where he continued employment with the company for 43 years and retired in management. He married Rosemary V. Pellegrini on October 7, 1950 at St. Mary’s Church in Calumet, Michigan and was married for 56 years to the love of his life. They moved to Traverse City in 1950 soon after their marriage. Bud and Rosemary were longtime members of St. Francis Catholic Church, where they both enjoyed volunteering for many years. After retirement they loved traveling to numerous destinations throughout the United States and Europe with friends and family. Bud enjoyed many years of creative woodworking including carving ducks, birds, and special projects with his grandchildren. He was truly talented and gifted. His family enjoyed frequent stories of the adventures of Bud’s early childhood in Calumet. Henry was preceded in death by his wife Rosemary January 5, 2007, his parents and brother, Robert Tiberg. Henry is survived by his daughter, Deborah (Thomas) Willson of Traverse City; son Michael (Terry) Tiberg of Traverse City; four grandchildren Matthew (Heidi) Tiberg, Kyle (George) Dickinson, Heather (Jonathon) Tallinger, and Ashley (Matthew) Bykowski, and his brother Raymond (Diane) Tiberg, and eight great-grandchildren: Corbin, Wesley, and Sylvie Dickinson, Ava, Cameron, and Isabel Tallinger, Brooklyn and Luke Bykowski, cousin Patty Nebel, and longtime friend Arlene O’Brien. Also surviving are many nieces and nephews. His family would like to thank Munson Hospice, Comfort Keepers, and the nursing staff on A4 and A7 at Munson Medical Center for the wonderful care of their father, as well as Drs. Benjamin Lamphere, Peter Koehler, and Ward Gillette. A funeral mass will be held on Saturday August 14, 2021 at 11:00am at St. Francis Catholic Church in Traverse City, with visitation from 10:00am to the beginning of service. The family requests those who wish to express sympathy to consider making a donation to St. Francis Catholic Church or Munson Hospice in Henry’s name. The family is being served by the Reynolds Jonkhoff Funeral Home.

The family of Henry "Bud" Tiberg created this Life Tributes page to make it easy to share your memories.