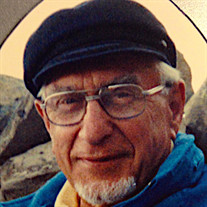 Henry A. Tuttle died peacefully at his home in Traverse City, Michigan, on September 3, 2015, a month after turning 98 years old. Known to his many family and friends as “Tut”, he spent his final years in Traverse City after living for almost 20 years in Rancho Palos Verdes, California and, before that, for over 50 years in Dearborn, Michigan. Tut was born on August 4, 1917, in Detroit, Michigan, to the late Wallace Wells Tuttle and Marjorie (Fitch) Tuttle. After losing his father when he was only eight years old, he and his mother, an educator and graduate of the University of Michigan, lived in Putnam, Connecticut and in Tucson, Arizona. Tut graduated from the University of Michigan with a Bachelor’s of Science degree in Chemistry in 1940 and married the late Elizabeth Jane Simonds in Ann Arbor, Michigan on July 3, 1941. He then went to work for the Ford Motor Company as a metallurgical engineer and worked on B‐24 bombers at the Rouge Plant in Dearborn during World War Two. He continued his employment with Ford for 35 years and retired in 1975. He and Elizabeth pursued his passion for sailing and purchased the first C&C‐design sailboat sold in Michigan, a Redwing 30, in the early 60s. As members of the Grosse Ile Yacht Club, they sailed throughout the Great Lakes for many years, including a couple of Port Huron to Mackinaw races. After retirement, he and Elizabeth traveled around the United States in an RV, visiting family and friends and researching genealogy. Elizabeth passed away in 1990, and Tut was blessed to meet a second love of his life, Helen Speed Hensinger. They married in 1994 and Tut moved to Rancho Palos Verdes, California. He lived happily in a close community of new friends. After Helen died in 2003, Tut continued to live in their condominium on the shore of the Pacific Ocean until 2009 when his health required his move back to Michigan to be near his son and daughter‐in‐law. His final years in Traverse City were enhanced by his dedicated care givers, Penny Paulley and Wendy Martin, and the other wonderful employees of The Crystal Penny, Inc., for whom his family is eternally grateful. Tut was truly a gentle and kind man and will be a cherished part of our fond memories for many years to come. At his request, no memorial service will be held. Through Tut’s prior arrangement, his cremated remains will be spread upon the waters of the Pacific Ocean. Surviving are his children, Wallace (Susan) Tuttle of Traverse City, Michigan, Richard (Raven) Tuttle of Ann Arbor, Michigan, and three grandchildren, Michael, Ryland, and Chloe. Tut was preceded in death by his parents, wives Elizabeth and Helen, and a daughter Patricia Marie. Kindly share thoughts and memories with Tut’s family at www.reynolds‐jonkhoff.com.

Henry A. Tuttle died peacefully at his home in Traverse City, Michigan, on September 3, 2015, a month after turning 98 years old. Known to his many family and friends as &#8220;Tut&#8221;, he spent his final years in Traverse City after living... View Obituary & Service Information

The family of Henry A. Tuttle created this Life Tributes page to make it easy to share your memories.

Henry A. Tuttle died peacefully at his home in Traverse City,...