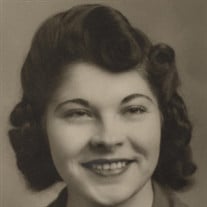 Herta Halana Wardwell, 95, of Traverse City , passed away Friday, July 3, 2015 at Grand Traverse Pavilions in Traverse City. Herta was born on Saturday, August 02, 1919 to the late Rudolf and Emilie (Becker) Siegert in Curow, Germany. She and her family immigrated to America when Herta was three years of age. She became a naturalized citizen on June 14, 1930. She grew up on a farm in Ossineke, near Alpena. Working in a factory in Detroit when she was a young woman, she joined a bowling team. It was through that affiliation that she met Charles Ellery Wardwell. They married on Friday, May 16, 1947 in Detroit and shared life together for 58 years. Charles preceded her in death on June 2, 2005. Herta and Charles lived in the Detroit area for many years. Herta had worked as a housekeeper for private family homes while Charles had been employed by Ford. When they retired, they lived in the Oscoda, Alpena and East Tawas areas before moving to Traverse City in 1988. Herta was a member of Trinity Lutheran Church, had been a 4-H leader when her daughters were young and enjoyed knitting and bowling. Herta is survived by her daughters, Sandra Wardwell of Tempe, AZ, Betsy (Paul) Imotichey of Smyrna, TN; two grandsons, Charles (Caroline) Scudder of Murfreesboro, TN and Brett (Bobbie) Scudder of Tennessee and Africa, her great grandchildren, Grace, Gabriel, Hannah, Ethan and Emma. Also surviving are her sisters, Elsie Martin of Farmington Hills and Agnes Martinsen of Gainesville, FL, as well as many nieces and nephews. She was preceded in death by her parents, her sister, Augusta "Pat" Davy and her brothers, Albert and Alfred. At her request, cremation has taken place and she will be inurned in a private family service next to her husband at Glen Eden Memorial Park in Livonia. Herta may be remembered through a memorial contribution to the Grand Traverse Pavilions Foundation, 1000 Pavilions Circle, Traverse City, 49684 (www.gtpavilions.org) ot Trinity Lutheran Church, 1003 S. Maple, Traverse City 49684. Please share your thoughts and memories of Herta with her daughters by way of her online guestbook/tribute page at www.reynolds-jonkhoff.com. The family is being cared for by Reynolds-Jonkhoff Funeral Home and Cremation Services.

The family of Herta Wardwell created this Life Tributes page to make it easy to share your memories.