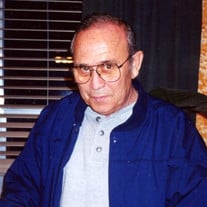 Howard R. Broder, 82, of Traverse City passed away on Sunday December 15, 2019 at Maple Valley Nursing Home. Howard was born on July 12, 1937 in the Bronx, New York to the late Irving and Olga (Mora) Broder. He proudly served his country in both the U.S. Navy and the U.S. Coast Guard, he had over 30 years of service. Howard had also been employed as a corrections officer for the State of New York. He married the love of his life, Kathleen Harper on May 3, 2003 in Frankfort, Michigan. He was a member of Harbor Light Christian Center. Howie enjoyed volunteering at both Goodwill and the Fr. Fred Foundation. He was also an avid collector. Howard is survived by his loving wife, Kathleen, two stepdaughters and a stepson; Tammy (Richard) Rodriguez, James Agle and Heather (Sean) Lardie as well as, a son and two daughters from a previous marriage. Also surviving are step grandchildren; Bradley, Earl, Patrick, Madison and Camryn and step great-grandchildren; Alaura, Harley, Jace, Yvonne and Scarlet. He was preceded in death by a step grandson, Jake and two brothers. A funeral service honoring Howard will take place at 11:00 a.m., with visitation starting at 10:00 a.m., on Saturday, December 21, 2019 at the Reynolds-Jonkhoff Funeral Home, 305 Sixth St, Traverse City, Michigan 49684. Pastor Peter Moon will officiate. In honor of Howie’s love of sports please dress in your favorite team’s apparel. Military Honors will be conducted under the auspices of the U.S. Coast Guard, Cherryland V.F.W. Post 2780 and American Legion Post 35. Burial will follow in Grand Traverse Memorial Gardens. Those planning an expression of sympathy may wish to consider a memorial donation to Harbor Light Christian Center, 4050 Barnes Rd, Traverse City, MI 49684 or the Cherryland Humane Society, 1750 Ahlberg Rd, Traverse City, MI 49696. Please feel free to share your thoughts and memories with Howard’s family at his tribute page at www.reynolds-jonkhoff.com. The family is being cared for by the Reynolds-Jonkhoff Funeral Home and Cremation Services.

Howard R. Broder, 82, of Traverse City passed away on Sunday December 15, 2019 at Maple Valley Nursing Home. Howard was born on July 12, 1937 in the Bronx, New York to the late Irving and Olga (Mora) Broder. He proudly served his country in... View Obituary & Service Information

The family of Howard R. Broder created this Life Tributes page to make it easy to share your memories.

Howard R. Broder, 82, of Traverse City passed away on Sunday...