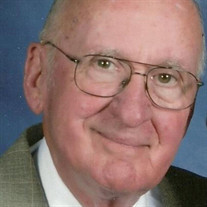 Howard Edmund Byrne Jr., 83, of Traverse City, passed into eternal life on December 27, 2020 at his home. Howard was born on June 30, 1937 in Detroit. He was raised in Royal Oak by his parents, Howard Sr. and Olive Florence (Severy) Byrne. He married the love of his life, Mary Ellen on June 27, 1964 in Northville. He attended the grade school and high school of the National Shrine of the Little Flower Basilica in Royal Oak and was a student of the Reverend Charles E. Coughlin. He later was a board member at the high school. He graduated from the University of Detroit College of Commerce and Finance in 1960 and the Detroit College of Law in 1963. Howard was then employed by the Jim Robbins Company in Troy, MI as Manager of Human Resource. After 10 years he joined the United States Postal Service. He was employed as the manager of employee and labor relations at the Detroit Bulk Mail Center and then became Manager of Labor Relations at the Detroit Post Office and Sectional Center. During one year of his stay in Detroit, he handled more arbitration cases than anyone else in the country for the postal service. He then transferred to the position of Director of Employee and Labor Relations at the Royal Oak Post Office and Sectional Center until he was promoted as Postmaster at the Eastpointe Michigan Post Office. He also served as a Hearing Officer for the United States Postal Service Central Region. Howard retired in 1997 and moved to Traverse City. For many years, Howard was the proud owner of a 1923 Bickel International Fire Engine and enjoyed taking it to Greenfield Village with the family and participating in local parades and events. Howard volunteered at the Maritime Heritage Alliance where he helped on the reconstruction of the boat Welcome for 10 years. He then continued to work on smaller boats and then on very small boats when he opened a model shop at the Maritime Heritage Alliance. Howard was a member and past president of the Ancient Order of Hibernians, Bun Brady Division. One of the highlights of the year for Howard was St. Patrick’s Day and the Hibernian Parade in Traverse City, where he was privileged to be named a Lord Mayor. He was a member of the Bun Brady Division Ancient Order of Hibernians, Sons of the Union Veterans, The Traverse City Economics Club and a devout member of St. Joseph Catholic Church, Mapleton. Howard is survived by his wife, Mary Ellen (Crusoe) Byrne of 56 years, his daughter Virginia Marie Abramson (Joseph), son Howard Edmund Byrne III and grandson Brandon Michael Byrne. He was predeceased by his parents and is survived by a sister Laura Florence McLaughlin and a brother William Michael Byrne and several cousins, nieces and nephews. The family thanks the staff at Munson Healthcare Hospice for their assistance in making a long journey easier. Those wishing to consider a memorial donation can contribute to Saint Joseph Catholic Church, 12675 Center Road, Traverse City, MI 49686, Father Fred Foundation, 826 Hastings Street, Traverse City, MI 49686 or the Maritime Heritage Alliance, 13268 S W Bay Shore Drive, Traverse City, MI 49684. Visitation from 5:00-6:00 PM followed by the Rosary at St. Joseph Catholic Church on Old Mission Peninsula, Wednesday, December 30, 2020. Visitation at 9:00 AM followed by Mass of Christian Burial at 10:00 AM, Thursday December 31, 2020. Please visit www.StJosephTC.org to view the live stream of Howard’s service. Please share a memory with Howard’s family by visiting his tribute page at www.reynolds-jonkhoff.com. The Reynolds-Jonkhoff Funeral Home and Cremation Services is serving the family.

Howard Edmund Byrne Jr., 83, of Traverse City, passed into eternal life on December 27, 2020 at his home. Howard was born on June 30, 1937 in Detroit. He was raised in Royal Oak by his parents, Howard Sr. and Olive Florence (Severy) Byrne. He... View Obituary & Service Information

The family of Howard Edmund Byrne Jr. created this Life Tributes page to make it easy to share your memories.